The writ of election 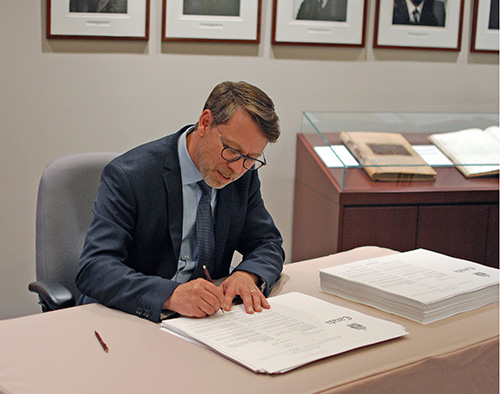 The writs of election

What is a writ of election?

A writ is a formal written order instructing the returning officer in each electoral district to hold an election to elect a member of Parliament.

Issue of the writs for a general election

Starting with the call of the election, the writs go through a formal process with several steps (from being prepared and printed to being signed, returned and stored for safe-keeping), some of which are prescribed in law, while others are governed by convention and tradition.

Polling day must be no earlier than the 36th day and no later than the 50th day after the day on which the writ was issued, making the minimum and maximum lengths of a federal election period 37 days and 51 days, respectively.

Formal process for the writs when an election is called

When an election is called—while returning officers immediately begin (or, in some cases, have already begun) the work of setting up their offices, hiring staff and coordinating the vote—the formal process of preparing or “drawing up” the writs generally takes seven to 10 business days. That process is as follows:

The writs of election—a timeline

What happens after the election

Once the votes are counted and the results are validated, there is a process whereby returning officers write the name of the winning candidate for their electoral district on the back of the writ, then, sign the writ and return it to the Chief Electoral Officer (hence, the name, “returning officer”).

The official writs are kept by Elections Canada for 10 years. They are then transferred to Library and Archives Canada where they are stored securely.

The oldest federal election writs housed at Library and Archives Canada date from 1865.

Validation is scheduled by the returning officer to take place on a fixed date within the first seven days after election day.

When validating the election results, the returning officer compares the preliminary results communicated on polling night to the statement of vote completed at the polls and makes any necessary corrections.

Process for the writs after the election

Newly elected members of the House of Commons must swear or affirm allegiance to the Crown before taking their seats in the House.

The swearing-in is typically done by the Clerk of the House of Commons on an individual basis at the convenience of the member. The Clerk does not have to wait for the certified list from the Chief Electoral Officer.

Issue of a writ for a by-election

Specific procedures for a by-election

Whenever a vacancy in the representation of the House occurs, for whatever reason, the Speaker addresses a warrant (a written authorization) to the Chief Electoral Officer for the issue of a writ of election to fill the vacancy.

The writ for a by-election must be issued between the 11th day and the 180th day after the receipt of the warrant by the Chief Electoral Officer.

The Parliament of Canada Act requires by-elections to be called within six months of a seat becoming vacant, and a by-election period must be no longer than 51 days in total. The date of the by-election is fixed by the Governor in Council.

The Parliament of Canada Act includes an exception for a vacancy that occurs within nine months before a fixed date general election; in that case, no by-election is called and the seat remains vacant until the general election.

A writ for a by-election would be superseded and withdrawn when a by-election has been ordered for a day subsequent to the dissolution of Parliament and the calling of a general election.