Elections Canada launched a comprehensive communications and outreach campaign to inform Canadians about the 2015 election and position the agency as the trusted source of voting information. Using plain language and more visual elements than in the past, the campaign focused on getting important messages out to Canadians at the right time during the election calendar so they would be ready to vote. It delivered messages about voter registration, the four ways to vote and identification requirements.

The "Ready to Vote" campaign was designed to connect with Canadians at large, the majority of whom are registered to vote at their current address. It was also important to reach target groups who are known to face barriers to voting. People in these groups are less likely to be registered and receive a voter information card (VIC); are generally less aware of the electoral process and ways to vote; and, in many cases, do not have the necessary identification. For the 42nd general election, these outreach target groups were Aboriginal electors, electors with disabilities, electors from ethnocultural groups, electors who are homeless, seniors living in long-term care facilities, youth and students.

A number of other considerations were taken into account when developing the campaign, including: 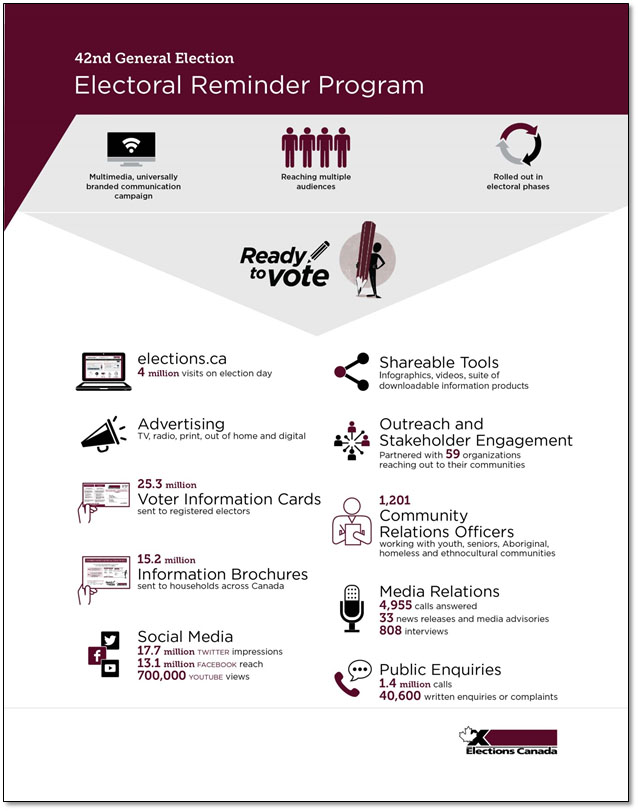 Elections Canada used national and local programs to provide information on registration and voting to its outreach target groups. 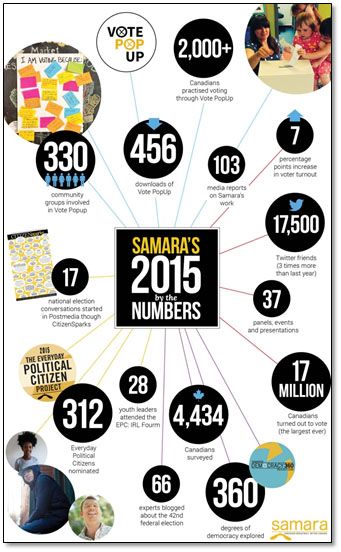 Text version of the infographic on Samara Canada's election activities

At the national level, the agency worked with organizations representing these groups to distribute voter information products, expand the reach of the agency's social media messages, promote online voter registration and monitor outcomes. Starting in spring 2015, a total of 59 organizations helped to distribute more than 11 million hard-copy information products and held 105 events to inform target groups on when, where and the ways to register and vote. Social media connections expanded the distribution of this information to an estimated 1.5 million electors. These organizations included Apathy Is Boring, Samara, CNIB, People First of Canada, Inuit Tapiriit Kanatami, Native Women's Association of Canada and the Assembly of First Nations. The complete list of organizations can be found on Elections Canada's website.

Elections Canada collaborated with Samara Canada on its Vote PopUp program for 2015. With the downloadable Vote PopUp kit, community groups could recreate a polling place to foster interest in the election and demystify the voting process for first-time voters. Elections Canada provided ballot boxes, posters and voter information products to support the program. Over 300 community groups were involved in Vote PopUp activities in varied locations such as a homeless shelter in Calgary, a settlement agency in Toronto, a mobile library in Ottawa and a farmers' market in Vancouver.

Table 4 in the Appendix lists the number of community relations officers and Aboriginal Elders and youth hired for the 40th, 41st and 42nd general elections.

This was the first time the agency used social media to provide electors with information about registration and voting. Its Twitter, Facebook and YouTube channels, launched in advance of the election, made it easier for Elections Canada and its followers to share digital voter information products. Twitter and Facebook were vehicles to respond to questions from the public, point them to specific information on the website, or refer them to the toll-free phone number or online complaints form.

On September 15, the International Day of Democracy, Elections Canada partnered with Facebook for a voter registration blitz as part of Canada's Democracy Week. Some 44,400 users successfully confirmed their information through the online voter registration service – the most transactions in a single day since the system's launch in 2014. As well, 1,328 users added themselves to lists of electors and 5,310 updated their address.

On election day, Facebook users could click on "I'm a Voter" in their news feeds and have it appear as a message in their friends' feeds. Some 12,422,158 users were reached in this way, and 814,373 people shared that they were voters. Users could also click a button for more information and be directed to the elections.ca website; over 150,000 people clicked on the button.

Text version of a Facebook message posted on election day

Elections Canada's Facebook posts reached 13.1 million users (based on the number of people who received messages in their news feed). The agency's Twitter messages earned 17.7 million impressions. Its videos on YouTube were viewed 700,000 times

The agency launched a new election-specific website in early August 2015 to put voter services front and centre – namely, the online voter registration service and the voter information service. The latter showed electors when and where they could vote based on their address, and provided information on the accessibility of their polling place.

From the home page, electors could learn about the ways to vote, identification requirements, and voting as a student or for the first time. They could access shareable voter information products, such as videos and infographics that made it easier for electors and groups to spread the word about voting. Two key documents were published online in 31 heritage and 12 Aboriginal languages: the voter identification requirements and a voter's guide.

The elections.ca website received a record 16 million visits during the election period, with 4 million visits on election day. Typically, visits to the website double from one general election to the next; however, the number of visits tripled in 2015 compared to the 2011 general election. On advance voting days and election day, mobile users accounted for 50 to 61 percent of visits. Live election results were published starting at 7:00 p.m. (Eastern Time) on October 19, with over 560,000 visits that night. 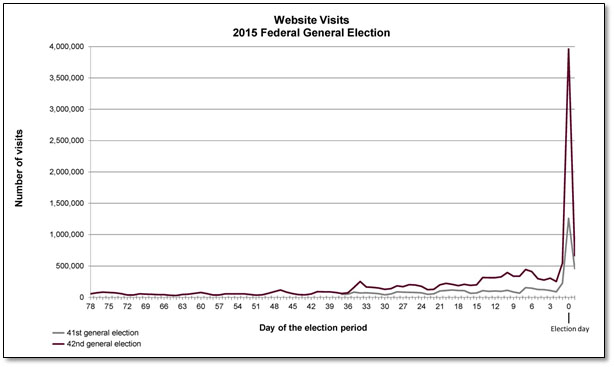 Elections Canada partnered with Google to make sure that people searching for voting information were directed to elections.ca as the authoritative source. Beginning in September, up-to-date information about when and ways to register and vote appeared directly on Google.ca when users searched for that information. This was supported with promotional days for voter registration on September 20 and for election day on October 19 on Google sites, including an election day Google Doodle and YouTube Yoodle.

The multimedia advertising campaign was delivered in phases that followed the important dates, themes and activities in the election calendar: 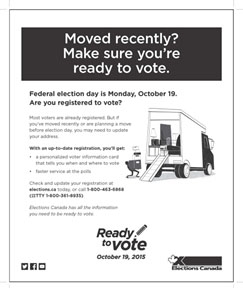 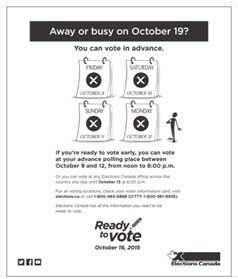 The campaign had an ongoing presence in mainstream, digital and specialty media. English and French mainstream ads were in 96 daily newspapers and 612 community newspapers, and carried on 708 radio and 63 TV stations. Ads also ran on 502 websites and in specialty media. 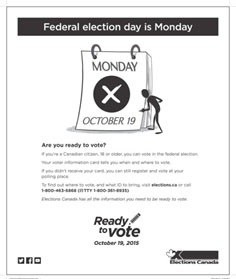 The advertising encouraged electors to check their registration; advised them to consult their VIC for when and where to vote; informed them of advance voting options at polling places and local offices; and promoted election day, reminding electors to bring identification and advising them that they could still register when they went to vote. 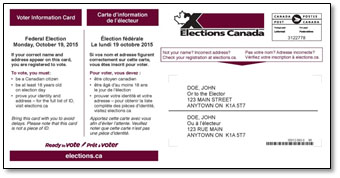 As in past elections, a VIC was mailed to all registered electors. It provided them with personalized information on when and where to vote, the accessibility of their polling places, and how to contact their local Elections Canada office. The agency mailed 25.3 million VICs by September 25 to electors whose names appeared on the preliminary lists of electors. It subsequently mailed about 300,000 revised VICs to advise electors of changes to polling place information and about 715,000 VICs to electors who were newly registered or had updated their name or address. 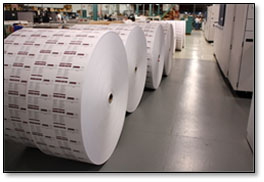 A week after sending the VIC, Elections Canada distributed a general information brochure to every household that provided residents with information about voter eligibility, registration, identification requirements (including the list of accepted identification) and the ways to vote. It prompted electors to contact Elections Canada if they had not received a VIC or received one with errors. The agency distributed nearly 15.2 million bilingual brochures to households across the country and 20,000 trilingual (English, French and Inuktitut) brochures to households in Nunavut. 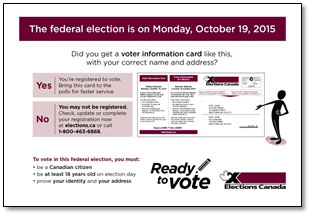 Elections Canada used its network of 14 national and regional media advisors as well as its permanent media relations advisors to keep in direct contact with the Canadian media and get information to electors. From the start of the election to the end of judicial recounts, this team responded to 4,955 calls from journalists. 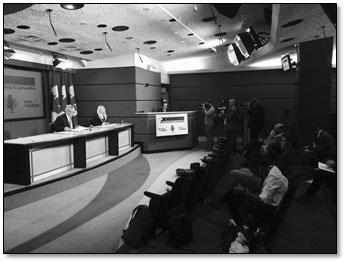 The vast majority of questions – some 4,640 – concerned routine matters of election administration, such as candidate nominations, ways to vote, identification requirements, advance polls, voter turnout and judicial recounts. Specific to this election were questions about the effect of revised electoral district boundaries and legislative changes in 2014, online registration (with a particular emphasis on VIC-related issues), and voting options for Canadians living abroad.

Elections Canada also initiated calls to the media to provide information on the electoral process. It issued 33 news releases and advisories.

The most common way electors accessed the national public enquiries service was through its toll-free telephone number. Callers were connected to an automated voice response system with self-service menus, available 24 hours a day throughout the election period. Those who wished to speak to an agent were connected to a national call centre agent, their local Elections Canada office or a call agent for special ballot voting. Agents answered phones from August 2 to September 7 on weekdays between 9:00 a.m. and 6:00 p.m. (Eastern Time), with reduced weekend hours, and from September 8 to October 19 between 7:00 a.m. and midnight (Eastern Time) seven days a week.

To handle the high call volumes, Elections Canada retained a private sector partner and renewed an agreement with the Government of Canada's Enquiry Centre. In addition, the Canada Revenue Agency supplied 60 call centre agents on several days during the election, including on election day. Electors could also contact Elections Canada through its website. Online forms made it easy to ask a question, send a compliment or suggestion, file a complaint, or provide feedback on the accessibility of polling places. Other options for contacting the agency were by fax or teletypewriter (TTY). 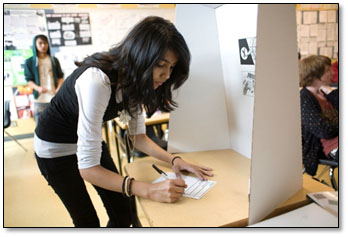 A student participates in the 2015 Student Vote program (credit: CIVIX).

As part of its ongoing civic education programming, Elections Canada contracted CIVIX to run the Student Vote parallel election program. From October 13 to 16, elementary and high school students took on the roles of election officers and voted for federal candidates running in their local riding. The vote followed a series of lessons and activities on government, candidates, parties and issues, as well as discussion with family and friends. More than half of all schools in Canada participated, with a record 922,000 students casting a ballot across all 338 ridings.