This first section of the Chief Electoral Officer's report on the federal by-election held on March 19, 2012, describes the circumstances leading to the calling of the by-election, the electoral district involved and the nomination of candidates. It also presents the number of registered electors, the polling stations, the voter turnout rate and the candidate elected.

The second section provides more information on the official voting results and summary data, in table format. The concluding section presents the poll-by-poll results for the electoral district.

Further information on the March 2012 by-election will appear in a report to be published in March 2013, covering the administration of all by-elections held in 2012. That report will be available at www.elections.ca.

The boundaries of the electoral district of TorontoDanforth were the same as those in effect during the 2011 federal general election. They coincide with the boundaries defined in the 2003 Representation Order, issued in accordance with the Electoral Boundaries Readjustment Act.

The returning officer for TorontoDanforth during the by-election was Mrs. Jennifer Janes, who is an Office Clerk residing in Toronto. 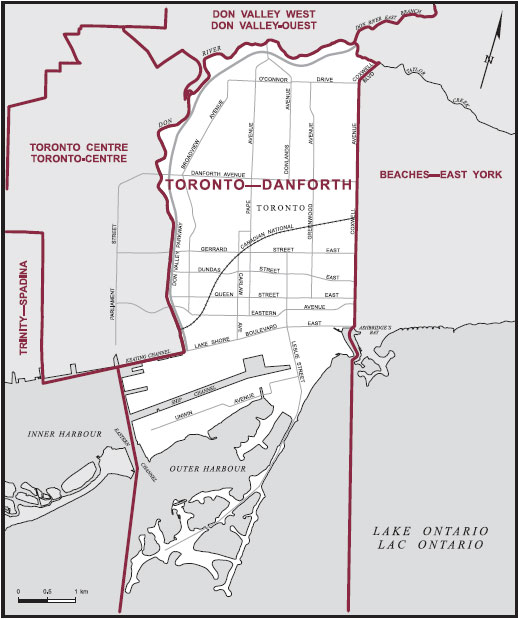 The candidates in the by-election had until 2:00 p.m. on February 27, 2012, to file their nomination papers in accordance with the date published in the Notice of Election by the returning officer.

For the March 2012 by-election, there were 74,612 names on the preliminary lists of electors. The lists were produced from information in the National Register of Electors. During the revision period, which extended from February 15 until March 13, 1,574 electors were registered in TorontoDanforth. These figures include electors who were already on the lists but had changed addresses.

The names recorded on the final lists of electors (that is, the lists prepared after election day) numbered 75,111 in TorontoDanforth. These lists included the names of the 756 electors who registered on election day, some of whom had changed addresses.

**Includes Canadian citizens residing in Canada who voted by special ballot in or outside the electoral district.

The New Democratic Party candidate, Craig Scott, was declared elected in TorontoDanforth once the validation of results was completed.

Following this by-election, the distribution of seats in the House of Commons was: