This section of the Chief Electoral Officer's report on the federal by-elections held on November 27, 2006, describes the circumstances leading to the call for the by-elections, the electoral districts involved, the candidates, the numbers of registered electors and polling stations, and the results.

The following section presents further information and summary data on the official voting results, in the form of tables. The concluding section gives the poll-by-poll results for the by-elections.

Information on the administration of the November 27, 2006, by-elections will appear in a report to be published in March 2007:

The report will be available at www.elections.ca.

On September 20, 2006, the Honourable Joseph Frank Fontana, the Liberal Party of Canada Member of Parliament for London North Centre since November 21, 1988, resigned, leaving his seat in the House of Commons vacant. A writ ordering a by-election in London North Centre was accordingly issued on October 22, 2006.

On August 28, 2006, Benoît Sauvageau, the Bloc Québécois Member of Parliament for Repentigny since October 25, 1993, passed away, leaving his seat in the House of Commons vacant. A writ ordering a by-election in Repentigny was accordingly issued on October 22, 2006.

The boundaries of the electoral districts of London North Centre and Repentigny were the same as those in effect during the 2006 federal general election. They coincide with the boundaries defined in the Representation Order of 2003, issued in accordance with the Electoral Boundaries Readjustment Act. 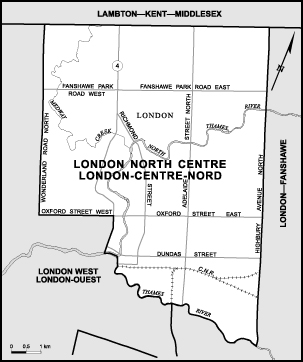 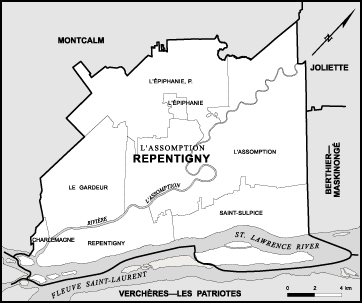 The candidates in the by-elections had until 2:00 p.m. on November 6, 2006, to file their nomination papers in accordance with the date published in the Notice of Election by Returning Officers.

In Repentigny, five registered parties nominated candidates: the Bloc Québécois, the Canadian Action Party, the Conservative Party of Canada, the Liberal Party of Canada and the New Democratic Party. Two candidates ran as independents. None of the candidates withdrew during the period in which this was permitted. The Green Party candidate's nomination was not accepted; the potential candidate arrived at the office of the returning officer shortly before the deadline of 2:00 p.m. on November 6 and did not have all of the documents required by the Canada Elections Act.

The names recorded on the final lists of electors (that is, the lists prepared after election day) numbered 90,797 in London North Centre and 85,366 in Repentigny.

* Includes Canadian citizens temporarily residing outside Canada, members of the Canadian Forces (except members of the Canadian Forces who voted at the polling station established for the polling division of their place of ordinary residence) and incarcerated electors.
** Includes Canadian citizens residing in Canada who voted by special ballot in or outside their electoral districts.
*** Due to rounding, figures do not add up to total shown.

Following the by-elections of November 27, 2006, the distribution of seats in the House of Commons was:

The Chief Electoral Officer may adapt the Canada Elections Act under subsections 17(1) and 178(2) to address an emergency, an error, or an unusual or unforeseen circumstance. During the 2006 London North Centre and Repentigny by-elections, he used the authority under these provisions on five occasions.

A mobile polling station in the electoral district of London North Centre was established to receive electors between 8:30 a.m. and 11:30 a.m. only at Granite House, 311 Central Avenue, London, Ontario, before moving to other institutions. As a result, one or more electors registered to vote at that mobile polling station were unable to vote during that limited time period. The Canada Elections Act was adapted to permit the returning officer or the assistant returning officer to issue transfer certificates to those electors so that they could vote at another polling station located nearby at Community of Christ, 615 Colborne Street, London, Ontario.