This section reports on issues related to voter identification requirements associated with voting. 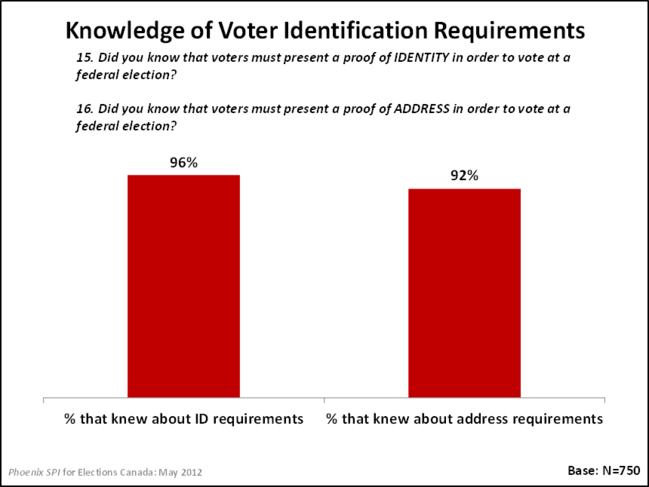 Electors born in Canada were more likely to know that voters must present proof of identity (99% vs. 90% of those born outside of Canada) and of address (94% vs. 88%). Compared to respondents from lower income households, those reporting household incomes of $100,000+ were more likely to know about the requirement to provide proof of address (96% vs. 88%). The likelihood of knowing about the identity requirements was higher among electors who had completed some university (100%).

All those aware of the voter identification requirements (n=727) were asked to identify how they heard about these requirements. Fully 56% cited their experience and/or the previous election and exactly four in ten pointed to the Voter Information Card.

Elections Canada's own communications efforts accounted for, at least in part, the awareness of approximately half of respondents who had heard about the voter identification requirements (i.e. 40% pointed to the VIC and 10% the flyer from Elections Canada). All other sources were identified by small numbers. 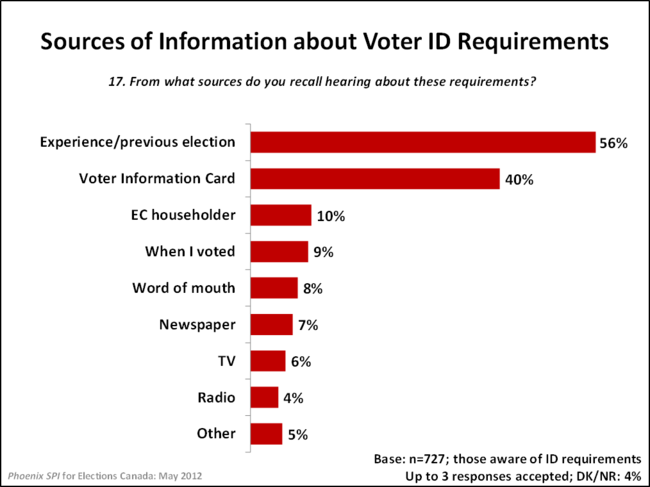 Text description of "Sources of Information about Voter ID Requirements"

The likelihood of pointing to experience and/or previous elections was higher among electors born in Canada (60% vs. 48% of those born outside of Canada) and respondents with household incomes of $100,000 or more (61% vs. 45% of those with household incomes of less than $40,000 per year). University graduates (44% vs. 30% of respondents with a high school education or less) and 25-44 year olds (44% vs. 33% of those 65 or older) were more likely to have heard about the voter identification requirements from the Voter Information Card.

Virtually Everyone Had the Required Identification Documents

Virtually everyone (99%) who voted at polling stationsFootnote 10 said they had the required identification documents with them when they voted. The very small number of voters who said they were missing piece(s) of identification (n=9) said they were missing a document with their address or with their photo. In terms of what they did, most went home to find the missing documents and returned to vote (n=4), swore an oath and voted (n=2) or had someone verify their identity (n=2).

In terms of the types of documents that voters showed to prove their identity and address, the large majority (79%) mentioned the drivers licence (compared to 90% in the 2011 general election). Other documents follow with much smaller frequencies: 12% used their Canadian passport, 8% their health card, and 6% a utility bill. Relatively consistent with 2011, the Voter Information Card (10%) was also reported to have been used by some electors in order to meet the identity requirements.Footnote 11 As shown in the following graph, all other documents were used by very small proportion of voters. 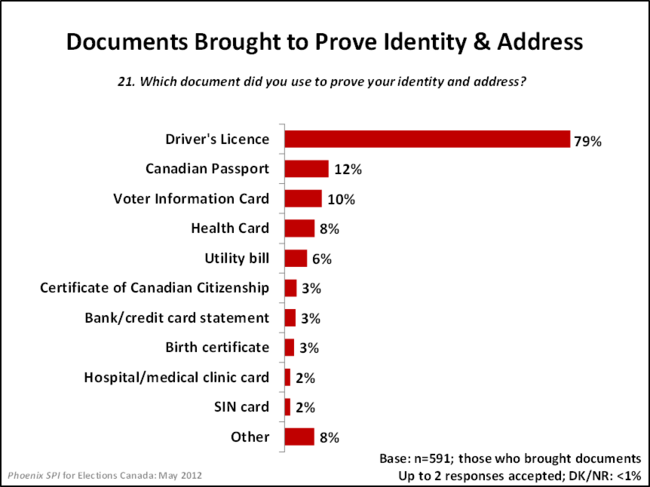 Widespread Agreement that it was Easy to Meet Voter ID Requirements

The vast majority of voters surveyed said it was very (80%) or somewhat (14%) easy to meet the identification requirements. Only 6% found this to be difficult.

These results are similar to that of the 2011 general elections, when 97% reported that the requirements were easy to meet. 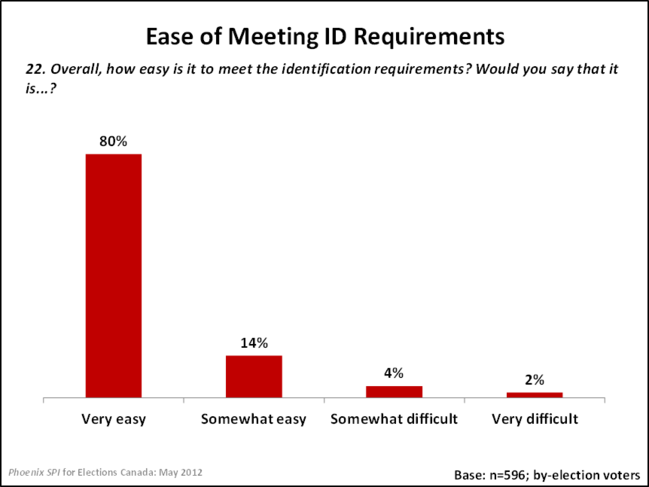 Electors under 25 (100%), men (97%), and those who were employed at the time of the by-election (96%) were more likely to say it was easy to meet the identification requirements.