This section explores issues related to the various communication channels Elections Canada used to carry out information to the electorate. 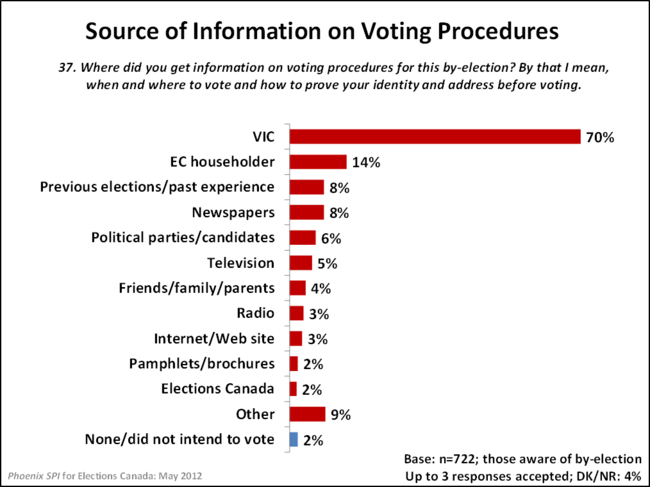 Text description of "Source of Information on Voting Procedures"

Following this, respondents were most likely to identify the media: newspapers (8%), television (5%), radio (3%), as well as the Internet/Web sites (3%). Other sources mentioned include previous experience (8%), political parties and/or candidates (6%), family and friends (4%), and pamphlets and/or brochures (2%). A host of other sources of information was identified by very small numbers (1% or less).

The likelihood of getting information on voting procedures for the by-election from their Voter Information Card was highest among respondents with higher household incomes: 77% for those between $60,000 and $100,000, and 80% for those beyond $100,000.

Those who were more likely to have obtained their information on voting procedure from the Voter Information Card also include employed electors (76%), electors between 25-44 year olds (75%) and 45-64 year olds (74%), electors born in Canada (74%), those without a disability (72%) and electors who completed their post-secondary schooling: college (70%) and university (75%).

Nearly one-third (31%) of eligible voters aware of the by-election (n=722) noticed an advertisement from Elections Canada about the voting process, compared to 40% in the 2011 general election. Conversely, 64% could not recall such an ad. 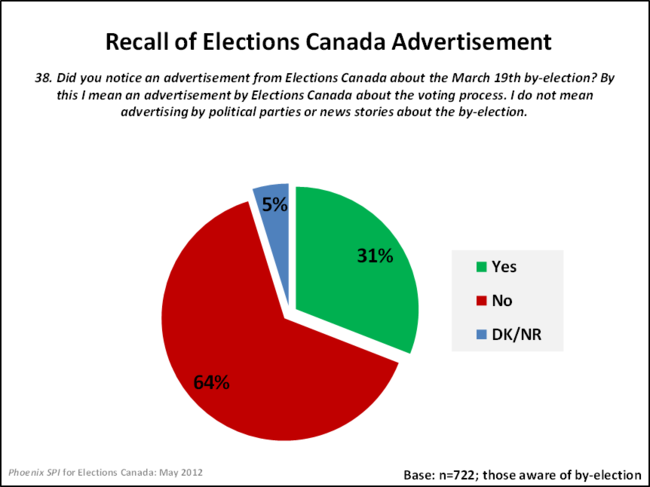 The likelihood of noticing the Elections Canada advertisement increased with age, from 5% of 18-24 year olds to 42% of electors 65 and older. In addition, recall was higher among electors at home full-time (40%), as well as those who are employed (31%) compared to unemployed electors (29%) and students (7%).

Advertisement Recall in Newspaper was the Most Noticed

Those who recalled an Elections Canada advertisement about the March 19th by-election (n=294) were most likely to have noticed it in newspapers (43%). Another 16% said they saw one on television,Footnote 6 14% heard one on the radio, and 10% cited the Elections Canada flyer. All other sources were mentioned with much smaller frequencies. 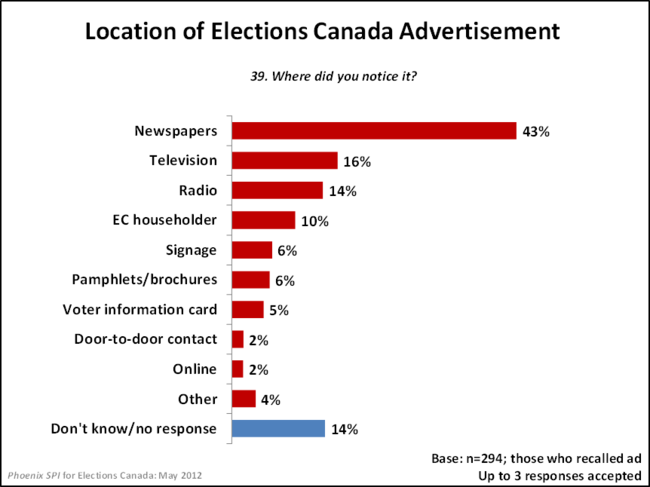 Respondents who recalled seeing or hearing an Elections Canada advertisement (n=294) were asked if they remembered what it talked about. The single largest proportion (26%) said they could not recall anything specific. Those who could, most often identified the election date (24%), a reminder to vote (16%), and the voter identification requirements (11%). As the related graph shows, several other items were mentioned by small numbers. 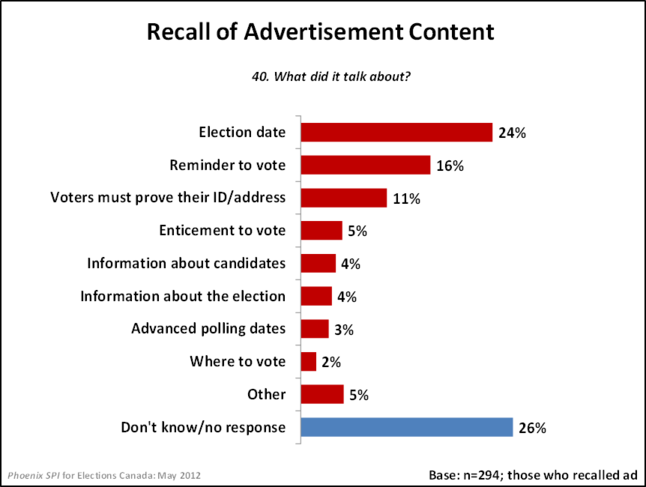 In terms of the type of additional information that would have been useful, the following items were mentioned (each by 1-2% of respondents): information about needing to show identification, the dates of the advanced polls, information on candidates, as well as information on voting by mail and on where to vote.

Return to source of Footnote 5 Refers to when and where to vote and how to prove their identity and address before voting.

Return to source of Footnote 6 It should be noted that Elections Canada did not produce any television ads for the by-election.