AWARENESS OF THE BY-ELECTION

Almost all eligible voters (96%) claimed to have been aware of the by-election that took place in their riding on March 19th, 2012, consistent with the awareness of the 2011 general election (98%).

In terms of how they heard about the March 19th by-election, respondents pointed most often to the mainstream media. Heading the list in this regard are television (45%) and newspapers (41%), followed at a distance by radio (26%). In addition, almost one-third pointed to signs of one kind or another, either candidate or party election signs (28%) or signage in general (4%). 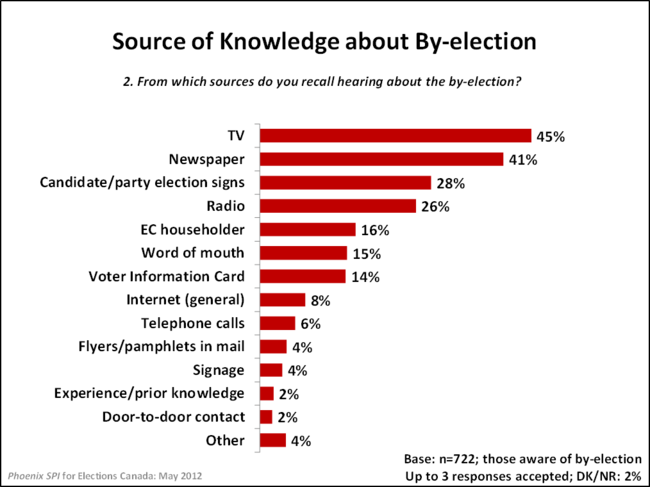 Text description of "Source of Knowledge about By-election"

All other sources were identified by far fewer eligible voters. These include the Elections Canada flyer/householder (i.e. the brochure/reminder card) (16%), word of mouth (15%), and the Voter Information Card (14%). Relatively small numbers (8% or fewer) learned about the by-election through the Internet (8%), telephone calls (6%), unspecified flyers or pamphlets (4%), as well as from their own experience and/or prior knowledge (2%) or door-to-door contact (2%).

Newspapers were more likely to be identified by older electors (47% of those 45 years and older), as well as those at home full-time (50% compared to people who are employed at 41%). Electors with household incomes of less than $40,000 were less apt to have learned about the by-election via a newspaper. The likelihood of having heard about the by-election on the radio was higher among older electors (28% of 45-64 year olds and 27% of those 65+), those with a university degree (32%), and those with household incomes of $100,000 or more (32%).