Retrospective Report on the 43rd General Election of October 21, 2019

The Retrospective Report highlights the main areas of the 43rd General Election that the Agency assessed. The report includes information and data collected in post-election analyses, official reports and audit findings, feedback from key stakeholder groups, research and surveys on the experience of electors, candidates, campus administrators and election officers.

Voter Turnout by Sex and Age

Infographic of Voter Turnout by Age

See the turnout results for electors living on reserve.

The National Electors Study was administered to over nearly 52,000 eligible Canadian electors. The survey was conducted in three waves. The three phases assessed different things: electors’ expectations, knowledge and intentions ahead of the general election; their experience of the election campaign and exposure to Elections Canada’s voter information campaign; and their experience and satisfaction with Elections Canada’s services and with the overall administration of the election.

Turnout and Reasons for Not Voting During the 43rd General Election: Results from Labour Force Survey

For the third time following a general election, Elections Canada partnered with Statistics Canada to include questions on voter participation in the Labour Force Survey. Respondents were asked whether they voted and their reasons for not voting.

Electors who had an opportunity to vote by special ballot at a campus office as part of the Vote on Campus initiative were asked questions about: their awareness of the option; how they found out about it; and their reasons for not voting on campus (if applicable).

Election officers, such as poll workers and recruitment officers, who worked in the 43rd general election were asked about their: attitudes toward Elections Canada and its service model; level of preparation and training; satisfaction with Elections Canada’s services and materials; attitudes toward technology at the polls; work experience in other jurisdictions; working conditions; and process of recruitment.

Infographic of Survey of Election Officers

Field liaison officers, returning officers, and assistant returning officers who worked in the 43rd general election were asked questions regarding their: use and comfort with technology and social media; understanding of the code of conduct for election administrators; use of Elections Canada headquarters’ social media products; engagement with groups of interest; awareness of 2019 communications products; and needs for the next general election.

Returning officers who worked in the 43rd general election were asked questions regarding their experiences, including what worked well and where improvements can be made to their administrative responsibilities.

Elections Canada required the services of a public opinion research supplier to conduct a baseline Survey of Official Agents (OAs) following the 43rd federal General Election. This survey aimed to assess official agents' views and experiences with the 43rd General Election (GE) with regards to the financial obligations of the candidate campaign.

Candidates who ran in the last general election were asked about their: attitudes and beliefs toward Elections Canada and the electoral process; satisfaction with the services and tools provided by Elections Canada; and their perspectives on select policy issues.

Administrators of post-secondary institutions who helped organize Elections Canada polling stations as part of the Vote on Campus initiative were asked about their experiences delivering this program.

Stakeholders who participated in the Inspire Democracy program were asked questions about their experiences, including: activities conducted in the context of their agreement with Elections Canada; reach within target groups; sources of information about the elections; and satisfaction with Elections Canada products, tools and services.

Entities registered as third parties in the last general election were asked about their views and experiences regarding various aspects of elections and the 43rd general election in particular, including: attitudes toward the electoral process and Elections Canada; registration and reporting requirements; Elections Canada products, tools and services; and policy issues. 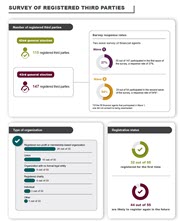