Responses to the survey were largely provided by those with some authority on the issue (i.e., in charge of coordinating polling activities in their facility). Seven in ten respondents (70 per cent) held the same position or responsibilities as in the previous general election held in October 2008. Just over half (56 per cent) of these respondents were authorized to sign and issue letters of attestation of residence.Footnote 1 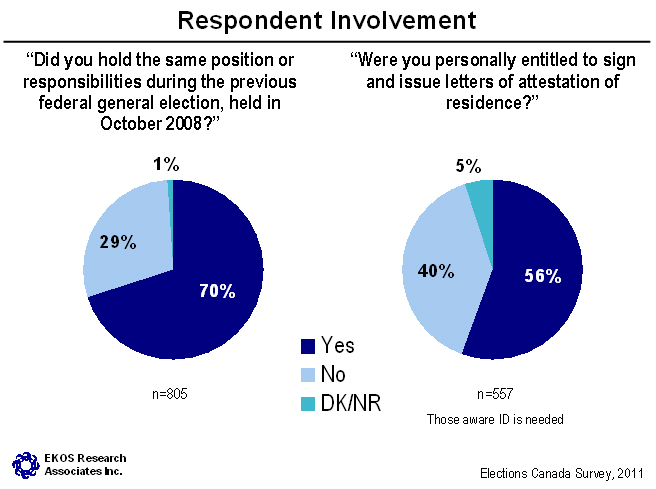 Virtually all respondents in the survey (99 per cent) said that they were familiar with the requirement that electors must prove their identity and address in order to vote in a federal election. Familiarity with the potential to use letters of attestation of residence as valid proof of address for voting was a lesser known fact, although the majority of respondents (70 per cent) were aware of it. A full three in ten (30 per cent), however, said that they did not know about this. 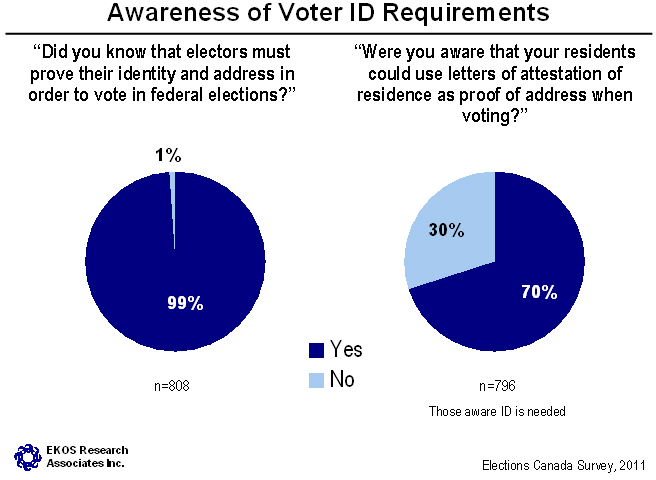 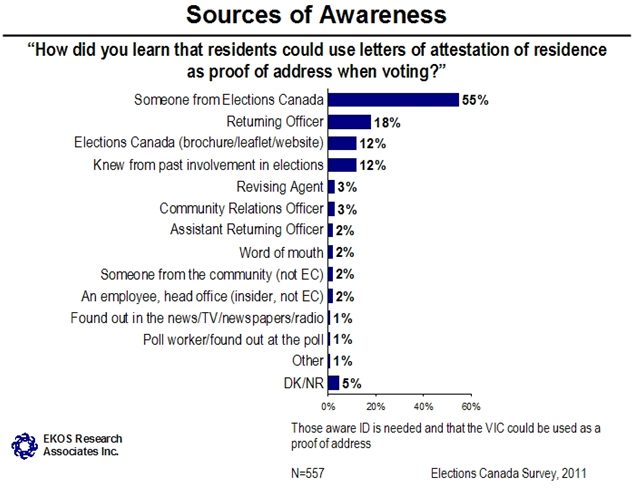 2.3 Awareness of Use of Voter Information Cards (VIC)

Most respondents (73 per cent) were aware that electors living at their location could use a voter information card as proof of their identity and address. Once again, information about this provision was usually heard from someone from Elections Canada (44 per cent of respondents). One in ten (10 per cent) identified the Returning Officer as the source of this information. One in five (19 per cent) said they knew about this from information printed on the VIC itself. One in seven (13 per cent) learned about it from an Elections Canada brochure, website or leaflet. One in ten (10 per cent) were unsure where they got this information. 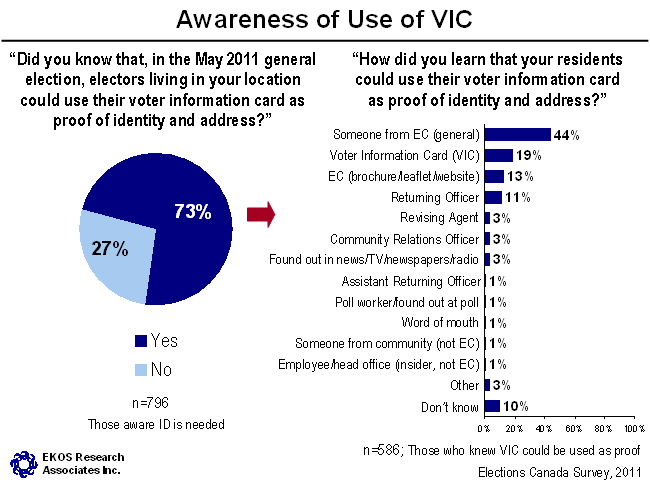 text description of graph "Awareness of Use of VIC"

2.4 Level of Satisfaction with Information Provided

Virtually everyone who reported that they received their information from an Elections Canada official (i.e., Returning Officer, Assistant Returning Officer, Revising Agent, CRO, or an official generally) was at least somewhat satisfied with the information they received. More than seven in ten (71 per cent) were very satisfied and another quarter (25 per cent) were somewhat satisfied. 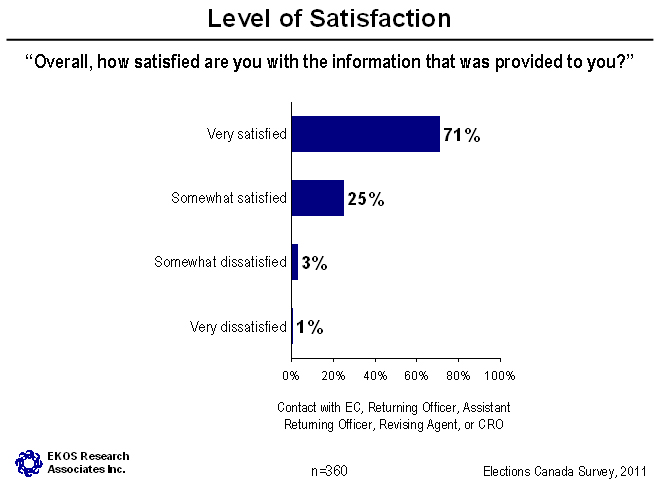 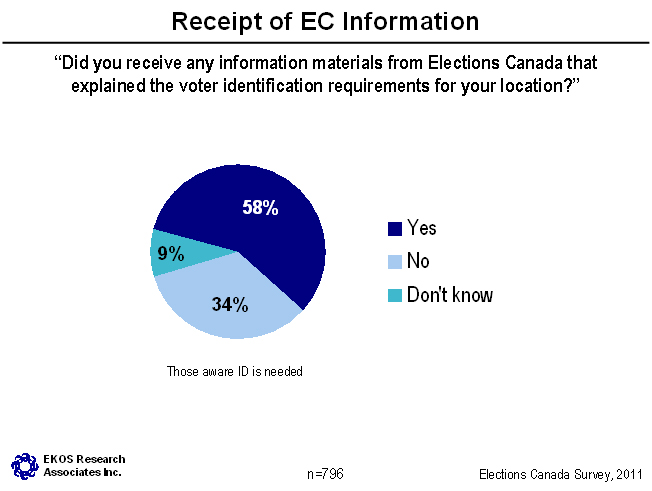 2.5 Letters of Attestation of Residence

Relatively few respondents from organizations that issued letters of attestation of residence said that there were any challenges to issuing these letters. One in ten (10 per cent) reported that the task of issuing letters was time consuming and a lot of work. Four per cent said that the lack of information, explanation or instructions made it difficult for them; and an equal proportion said they felt rushed at the last minute. Nearly eight in ten (79 per cent) said that they encountered no problems. Respondents who did not hold the same position in 2011 as they did in 2008 were more likely to have felt challenged by a lack of information or explanation about letters of attestation. 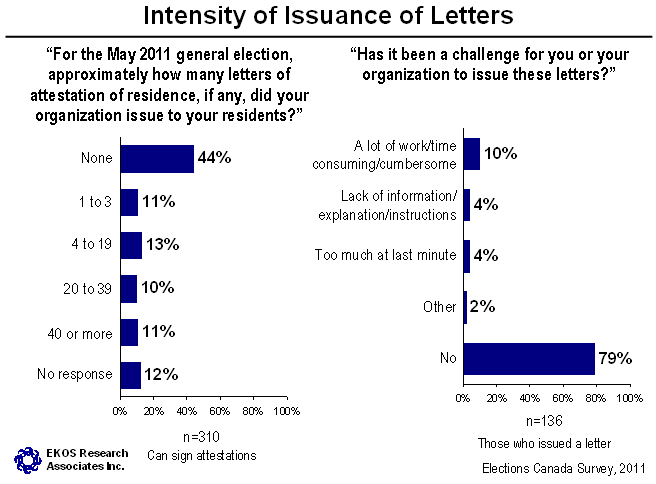 text description of graph "Intensity of Issuance of Letters"

Those who reported they had obtained information from an Elections Canada official were asked how many times they were contacted by Elections Canada in relation to the May 2011 election. Nearly half (46 per cent) were contacted three or four times. The average number of contacts is four. The average number of contacts is slightly higher in larger long term care/seniors' residences (i.e., those with 60+ residents) and in mixed LTCF/seniors' residences. 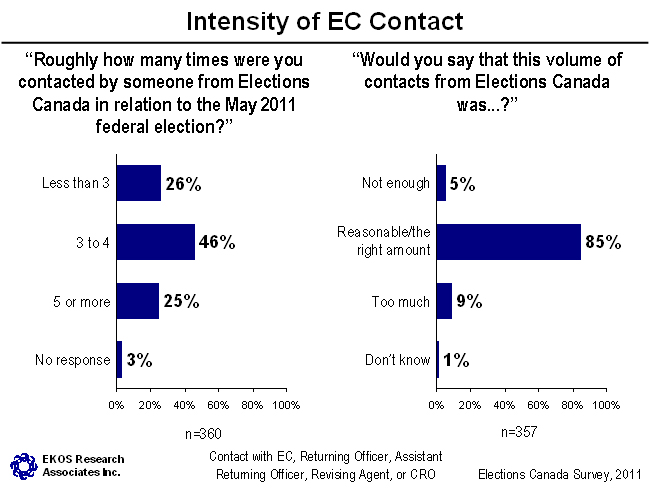 The vast majority of respondents (85 per cent) reported they neither heard nor witnessed any problems encountered by residents at their organization regarding identification requirements. Just seven per cent indicated they knew of someone encountering a problem with identification documents, such as difficulties regarding valid photo identification. Other problems each indicated by two per cent or less included: 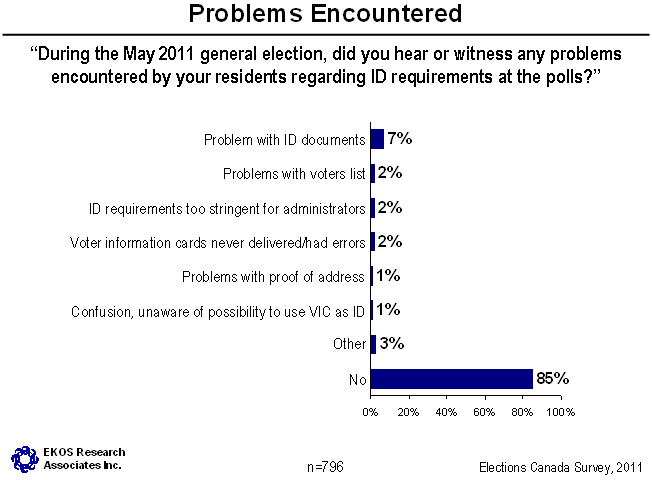 2.8 Impact of VIC on Voting Process

Respondents holding the same position in 2011 as they had in 2008 were asked to compare their experiences with voter identification, in light of the fact that Voter Information Cards were accepted as proof of identity and residence in 2011. Most felt this new measure made the voting process easier for residents compared to the 2008 general election. Almost two-thirds (64 per cent) said that the process was easier (26 per cent) or a lot easier in 2011 (38 per cent), and eight per cent felt the process had been made a little bit easier. Still, almost one-quarter (23 per cent) said they did not see any change or thought the process was no easier. 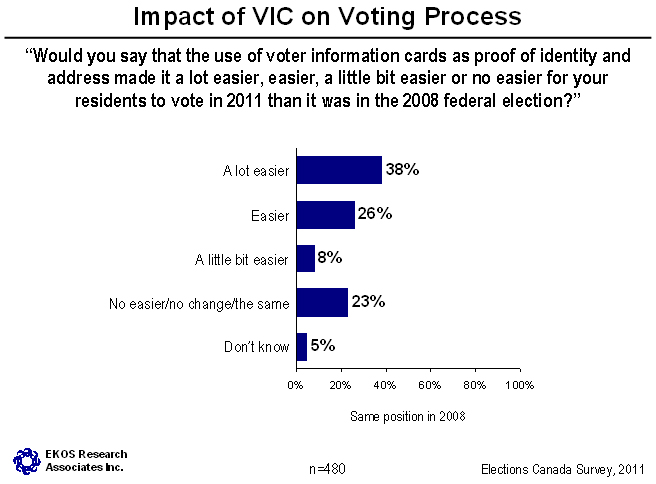 text description of graph "Impact of VIC on Voting Process"

A small number of organizations (n=45) reported having used the services of an Elections Canada Community Relations Officer (CRO) or Revising Agent (RA). Almost all of them (96 per cent) said the services they received facilitated the voting process. Most (71 per cent) also obtained information materials from these officials. Translation services, information sessions and information kiosks were other services that these officials were able to provide to respondents. All of the organizations receiving these services were at least somewhat satisfied, most (78 per cent) being very satisfied. The most satisfied were those likely to have used the information kiosk, information sessions or information materials (although numbers of cases using each service are quite small and these results are only directional at best). 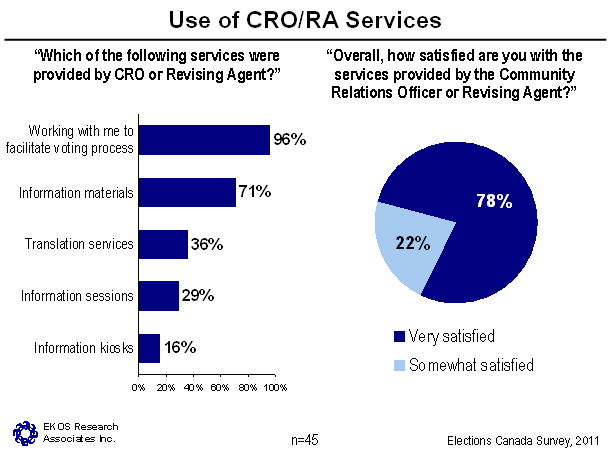 text description of graph "Use of CRO/RA Services"

Few respondents expressed additional concerns or suggestions for areas of improvement. But when they did, their suggestions varied widely between specific problems (13 per cent) and specific suggestions for changes in the future (32 per cent). Most commonly expressed concerns are that ID requirements should be simplified further; better training of poll workers and preparation by Elections Canada is needed; and more information about identification requirements and the voting process is needed. These suggestions, however, were each made by relatively small proportions of responding organizations (i.e., three to eight per cent). Most respondents offered no other suggestions, or reiterated their satisfaction with the experience and the improvement to the voting process. Seven per cent reiterated that their experience had been mostly positive or that accepting the VIC had improved the process.

Return to source of Footnote 1 Attestations of residence are letters signed by an authorized representative in order to prove where residents live.