2.1 Awareness of the By-election

2.1.1 Sources for Information about the By-elections

The top five sources of information about the by-elections cited by respondents were television, newspapers, radio, parties or candidates' election signs, and the voter information card. While some media were cited at a consistent rate across ridings, particularly the VIC and word of mouth, there was significant variation in the percentage of the electorate citing television, newspaper, and radio (see Figure 2.2 below). For instance, electors in BrandonSouris were most likely to cite newspaper or radio but least likely to cite television.

Notes: Columns may not add up to 100% as respondents were permitted to provide as many as three replies. The ordering of reasons in the table is based on the overall trend.

Some sources of information were also statistically related to particular socio-demographic groups:

Overall, about one-third of respondents (36%) indicated they had noticed an advertisement from Elections Canada, with some variation between ridings (see Figure 2.3 below). Electors in Brandon–Souris, MB in particular, were more likely to have noticed Elections Canada advertisements. 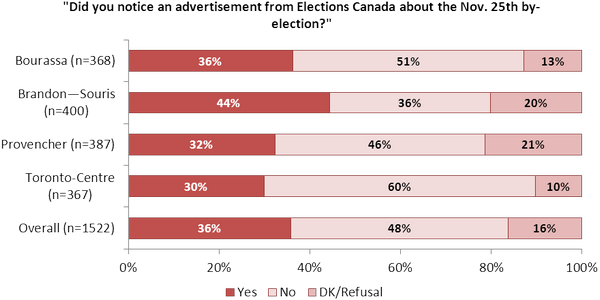 There was also significant variation among certain socio-demographic groups:

Traditional media were the primary sources where respondents noticed advertisements, with newspapers being the most cited source (47%), followed by radio and television (22% for each). It should be noted however that Elections Canada does not advertise on television during by-elections, and thus this rate account recall error on respondents' part, potentially attributing advertising by political parties and candidates to Elections Canada or simply misremembering where they saw the advertisement. This finding was particularly pronounced in Bourassa and Toronto Centre (see Figure 2.4). Respondents in these two ridings were also significantly more likely to have cited an Elections Canada householder brochure. A higher number of respondents in Bourassa cited signs, posters, pamphlets, or brochures around their area compared to other ridings.

Notes: Columns may not add up to 100% as respondents were permitted to provide as many as three replies. The ordering of reasons in the table is based on the overall trend.

Base: Electors who noticed an Elections Canada advertisement.

There was also significant variation in the sources cited by socio-demographic groups:

Respondents' most commonly recalled topic from advertising was the date of the by-elections, cited by 31% of those who noticed an advertisement. This was followed closely by "reminder to vote" (25%), the requirement that voters must prove their ID and address (12%), and "enticement to vote" (10%) (see Figure 2.5 below). It is important to note that six percent of respondents who saw Elections Canada advertising believed it to contain information specific to candidates or parties, indicating either confusion regarding the question or conflation between political and Elections Canada ads. This was observed primarily in Bourassa.

Notes: Columns may not add up to 100% as respondents were permitted to provide as many as three replies.

Base: Electors who noticed an Elections Canada advertisement.

A number of trends were found regarding advertising, namely that:

Exposure to each slogan was associated with some socio-demographic groups: The shape-your-world slogan was more commonly recalled by youth (23% compared to 12% for other age groups), students (41%, compared to 16% of employed electors, 10% of those who were unemployed and 9% of retired electors), and electors from low-to-middle-income households (low, 23%, and middle, 15% compared to high, 9%).

Despite the lower visibility of the shape-your-world slogan, it was clearly the preferred of the two, with 51 percent of respondents choosing it compared to 35 percent choosing the information slogan.Footnote 4 This preference was particularly pronounced in Bourassa and Toronto Centre, while preferences in the other two ridings were more evenly split (see Figure 2.7 below). 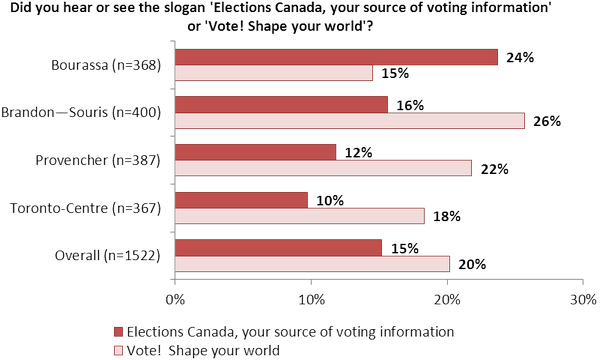 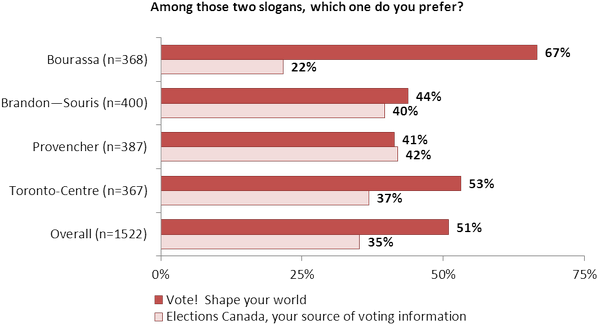 2.3 Awareness of Voting Procedures and Requirements

Most electors (59% of those aware of the by-election) received information on voting procedures (e.g., when and where to vote, how to vote, how to prove your identity, etc.) from their voter information card. The VIC was the most important source across all four ridings, though use of other sources for this information did differ significantly from one riding to the next (see Figure 2.8 below). Of particular note were trends in Bourassa, where nearly one-quarter of electors cited an EC householder, a rate about three-times higher than that in the other three ridings. Electors in Bourassa were also most likely to report learning about voting procedures from television.

Note: Columns may not add up to 100% as respondents were permitted as many as three replies.

Among voting procedures and requirements, the survey focussed particularly on proof of identity requirements. Most electors knew that voters must present proof of identity in order to vote at a federal election (95%), and nearly as many also knew proof of address was required (87%). Awareness of both requirements was significantly lower in the two Manitoba ridings compared to the two urban ridings (see Figure 2.9 below). This trend was most pronounced for awareness of proof of address.

Figure 2.9: Awareness of ID Requirements to Vote at a Federal Election

Text version of "Figure 2.9: Awareness of ID Requirements to Vote at a Federal Election"

Awareness of each requirement did not differ significanlty between socio-demographic groups. Voters were somewhat more aware of both requirements than non-voters (97% to 92% for proof of identity; 90% to 84% for proof of address).

Electors learned of proof of identity and address requirements from a variety of sources, though generally speaking this knowledge was largely "known prior to" rather than learned during the by-election period. The most common five sources were, in order of frequency:

Sources varied only modestly between ridings, with electors in Bourassa more likely to have learned of these requirements from an EC householder, and less likely from their voter information card, compared to the three other ridings (see Figure 2.10 below). This is counter-intuitive as electors in Bourassa were more likely than electors elsewhere to report having received a voter information card.

Note: Columns may not add up to 100% as respondents were permitted as many as three replies.

It is possible to vote by mail at any time during a federal election–including by-elections–but less than one percent of all voting respondents took advantage of this method. This may have been in part due to low awareness, as a majority of electors in all four ridings were unaware of this option (see Figure 2.11 below). Awareness was especially low in Bourassa, where more than two-thirds (69%) of electors did not know of this option. Voters were significantly more aware of this option than non-voters (46% to 28%). Women were less likely to be aware (35% vs. 42% of men), and awareness improved with age (18 to 34, 32%; 35 to 54, 38%; 55 and up, 44%).

Most electors who were aware of the by-elections (78%) had had no contact with Elections Canada during the campaign (other than when at the polling station on election day). Although Elections Canada does not call electors on the telephone to inform them about where or when to vote during elections, 18 percent of electors (who were aware of the by-elections) indicated that they had received such a call. Respondents in Bourassa were substantially more likely to have indicated that they received a call from Elections Canada than other ridings, with three-in-ten respondents saying they had received a call, significantly more than other ridings (see Figure 2.12 below). 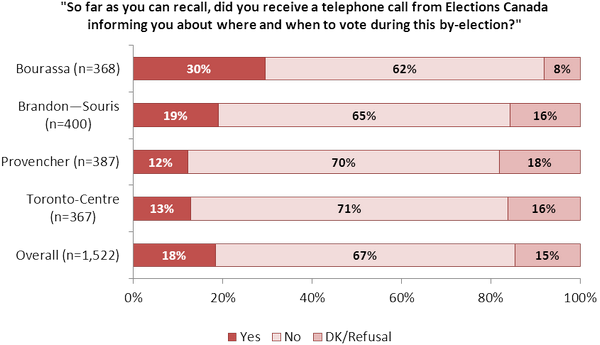 There were a few socio-demographic variances of significance for this question, namely:

Only five percent of electors reported that they attempted to contact Elections Canada themselves. However, those who did were significantly more likely to have voted than those who did not. Most electors who called Elections Canada reported having received all the information they needed (78%), as opposed to partial information (15%) or none (7%). Due to the low number of electors who attempted to contact Elections Canada (5% of all aware, n=82), comparisons between ridings and socio-demographic groups were not deemed statistically significant.

Most electors reported that they had received a VIC prior to the by-election day (87%). Electors in Bourassa and Brandon–Souris were the most likely to recall receiving a VIC, and those in Toronto Centre the least likely (see Figure 2.13 below). Electors who voted were more likely to recall receiving a VIC (93%) compared to those who did not (77%).

Base: All electors aware of by-election.

Recall rates of the VIC were higher among middle-aged (92%) and older electors (93%) compared to youth (73%); and among those who were retired (93%) or employed (82%) compared to unemployed electors (76%) and students (68%). It was additionally found that women were more likely to recall receiving a VIC than men (89% to 84%). VIC receipt did not differ significantly between electors with different types of dwellings (e.g., houses compared to apartments).

2.5.1 Accuracy of the Voter Information Card

Nearly all VICs received contained electors' correct addresses (97%) and names (96%). Accuracy did not differ significantly between ridings or socio-demographic groups.

Most electors only recalled that the VIC contained information on when and where to vote (59%), but sizeable portions of electors also recalled information about advance polls (17%), their polling station number (13%), or identification requirements (10%). Interestingly, about three percent of respondents recalled specific information about candidates and parties (although such information is not included on VIC).

2.5.3 Steps Taken by Electors Who Did Not Receive a Voter Information Card

If an elector did not receive a voter information card, they often did nothing to verify whether they were registered to vote (62% of electors who did not receive a VIC). Of those who did take action, they most commonly found out about their voter registration status at a local polling station or Elections Canada office (67%) or called the number indicated on another's VIC (12%). Electors in Provencher were most likely to take some specific action, while those in Bourassa were least likely to take action. Ultimately the key determinant of whether an elector took action to ensure they were registered to vote was voting behaviour itself. Among voters who did not receive a VIC, four-fifths (80%) took a specific action to ensure they were registered. Among non-voters however, less than one-fifth (14%) took action. There were no relevant trends related to socio-demographic variables.

Return to source of Footnote 3 In French, the shape slogan is "Voter c'est choisir son monde."

Return to source of Footnote 4 14 percent of electors expressed no preference among the two slogans.

Return to source of Footnote 5 Some age-relationships appear to intersect strongly with employment-relationships. For instance, one-quarter of students cited family, friends, or parents, compared to only seven percent among employed electors. Retirees similarly displayed trends that were on par with or greater than those observed for older electors.