This section provides information on the voting experience. It also highlights the convenience factor associated with the voting process when voting in person. Specifically, the satisfaction of voters with the language in which they were served and the waiting time at the respective voting location is discussed along with their perception about overall ease of voting process.

Note: The results in this section exclude those voters who voted through mail.

The overall impression is that the voters were very satisfied with the language of service and found the waiting time for voting to be reasonable. All voters in both ridings were served in English and it received an overwhelming satisfaction with 99% of voters indicating they were satisfied. The remaining 1% voters chose not to respond to this question. 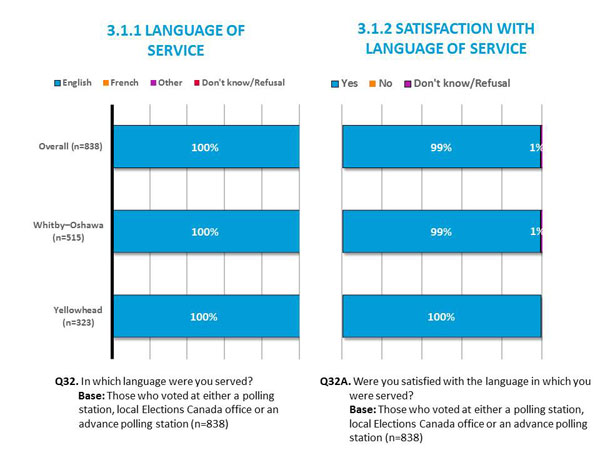 Among those few who indicated otherwise, insufficient staff (22%) and long line-ups (19%) were two of the most commonly mentioned reasons (Caution: Very small base size (n=11)). 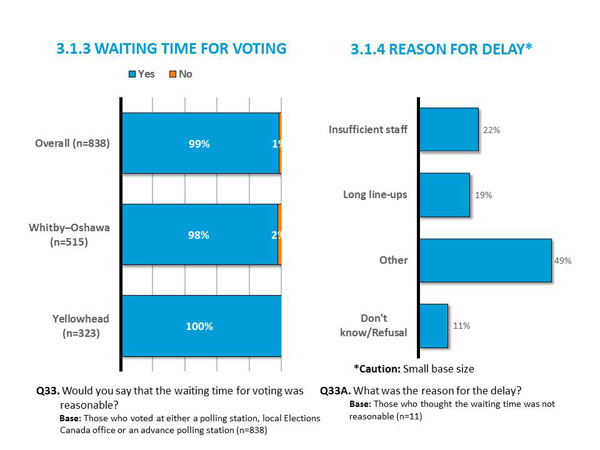 Overall, a wide majority (84%) of voters indicated it was very easy for them to cast their vote. The ease of voting was consistent among the two ridings with 84% of Whitby–Oshawa and 85% of the Yellowhead voters giving it the highest possible score. 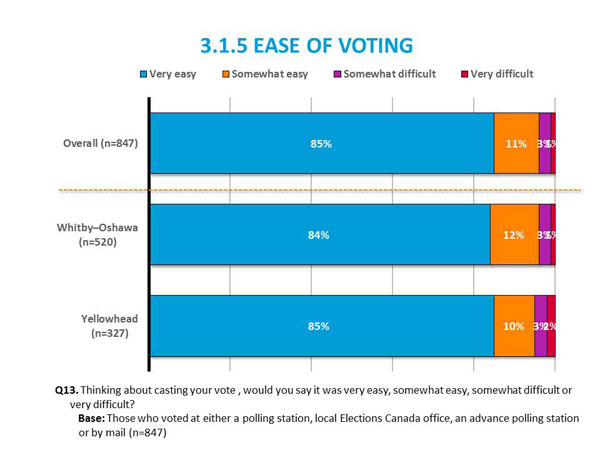 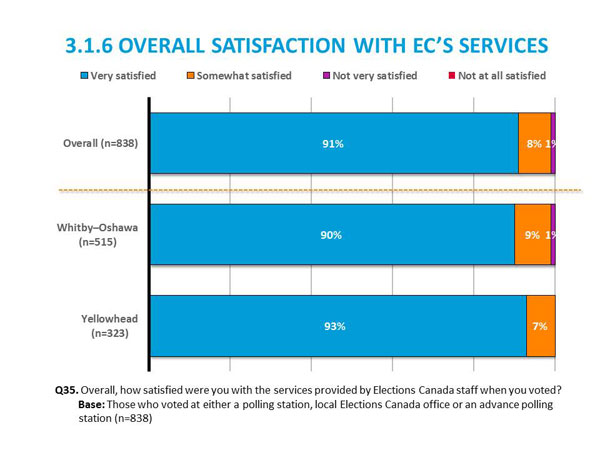 Very few (2%) voters said they did not have the required documents when they went to vote. Although both ridings were very similar in this respect, the proportion of voters who did not have the documents was slightly higher in Yellowhead (3% vs. 1%). 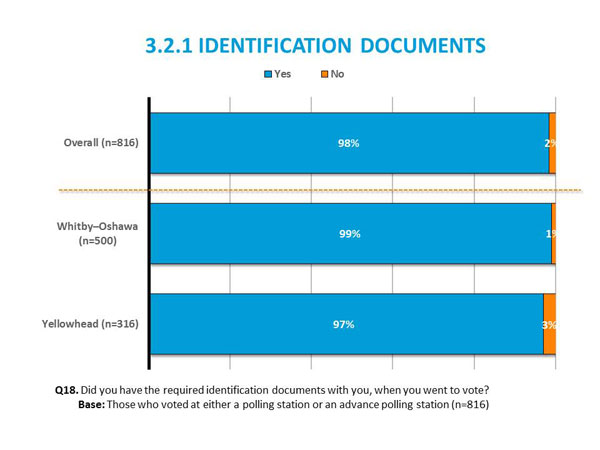 An overwhelming majority of respondents used their driver's licence as proof of identity (93%) and address. A provincial/territorial ID card that could have also been used to prove both identity and address was used by 1% of the voters. Voters from both ridings were very similar in terms of the documents used when going to vote.

Although used by very few voters, other documents presented include Canadian passport (2%), utility bill (1%), or health card (1%). While the VIC was not an acceptable piece of ID, except in specific locations, 3% indicated having used it. 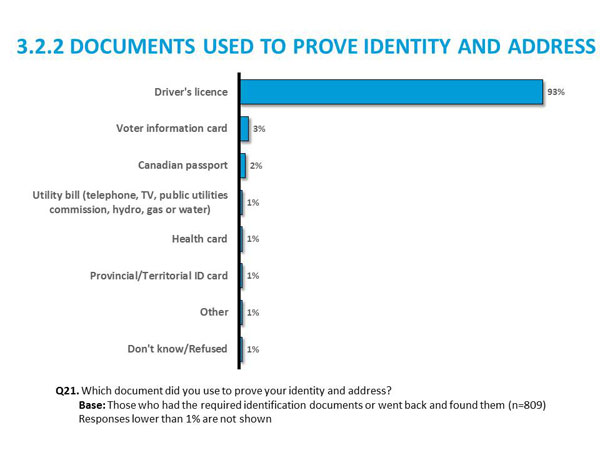 Text version of "3.2.2 Documents used to Prove Identity and Address"

Among the very few (n=12) who did not bring all the required documents with them for voting, nearly half (48%) were missing a document to prove their address while close to a quarter (24%) did not have a document that had their photo, name and address.

These respondents were further asked about what they did after realizing that they were missing some documents. Again, slightly less than half (46%) indicated that they went back to find missing documents. Only a few (8%) of these voters indicated swearing an oath before voting with incomplete documents. 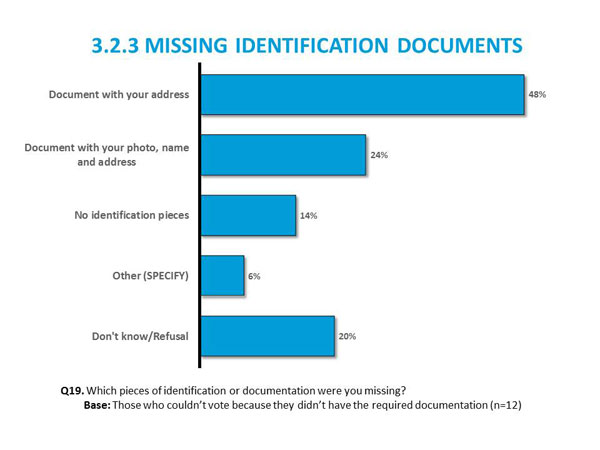 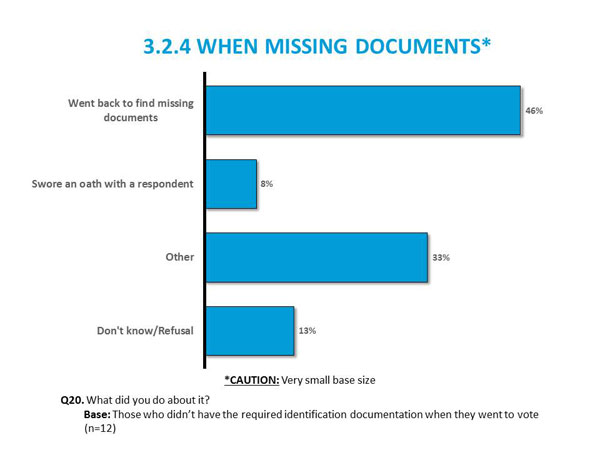 Text version of "3.2.4 When Missing Documents"

A majority of voters (83%) confirmed that it was very easy to meet the identification requirements while another 13% said it was somewhat easy. 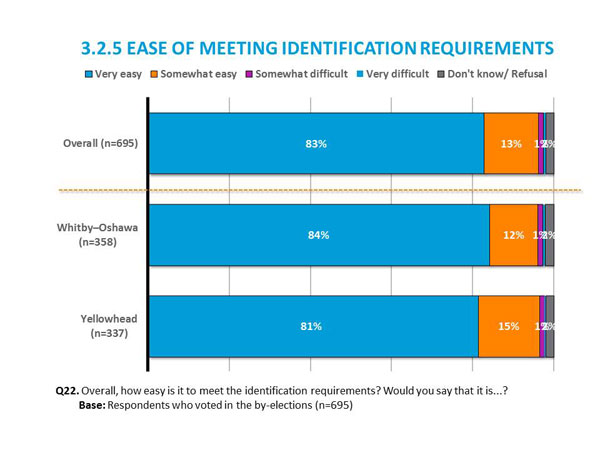 Overall, four out of five respondents thought Elections Canada ran the November 17 federal by-elections very or somewhat fairly, with nearly two thirds (63%) giving the highest possible score. Although the positive perception was true about voters from both ridings, voters from Whitby–Oshawa had a more positive view  70% said EC ran the elections very fairly compared to 56% in Yellowhead. 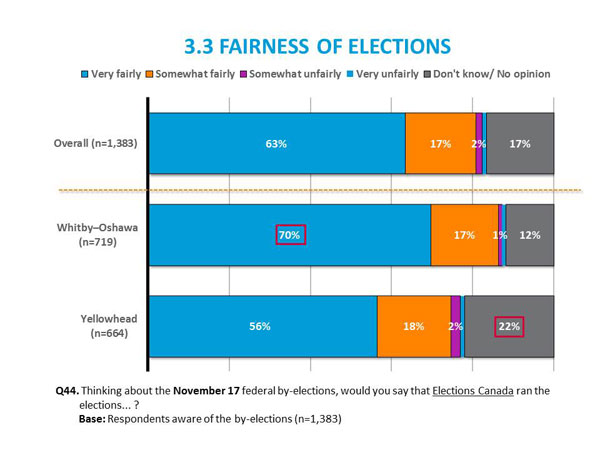 Text version of "3.3 Fairness of Election"