This section of the report provides information on voter participation rates at both the locations where by-elections were held and also aims to deliver insights on motivations driving voting behaviour. The survey classified respondents into voters and non-voters based on the information provided and asked them reasons for their respective behaviour. Most respondents who voted indicated they felt it was their duty to vote in the by-elections while most non-voters indicated work as the prime reason for not being able to vote.

The choice of voting method and time is discussed for those who took part in these by-elections. Majority of voters started from home and voted at the polling stations on the election day. For non-voters, the section highlights the potential motivators to vote in future elections.

About six in ten (59%) electors indicated taking part in the by-elections held on November 17, 2014. The voter participation was significantly higher in Whitby–Oshawa (71%) as compared to the participation rates reported in Yellowhead (47%). 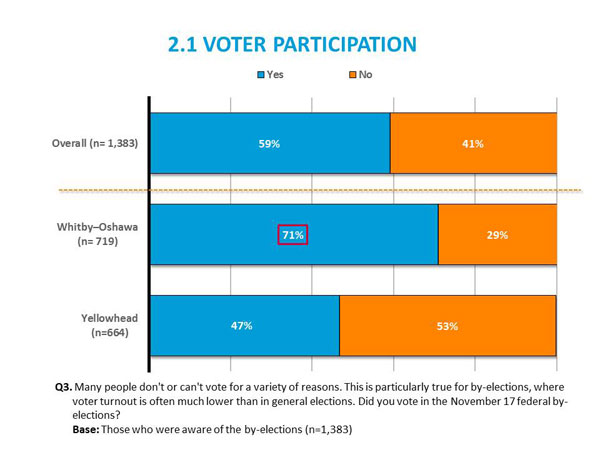 Among those who voted in the by-elections, two in five (39%) felt that it was their duty to vote. Some of the other commonly cited reasons for voting include: Habitalways vote (17%) and it is important to participate in political process (11%). The motivations for taking part in the by-elections were fairly similar in both regions with no significant differences. Some key observations about demographic sub-groups were: 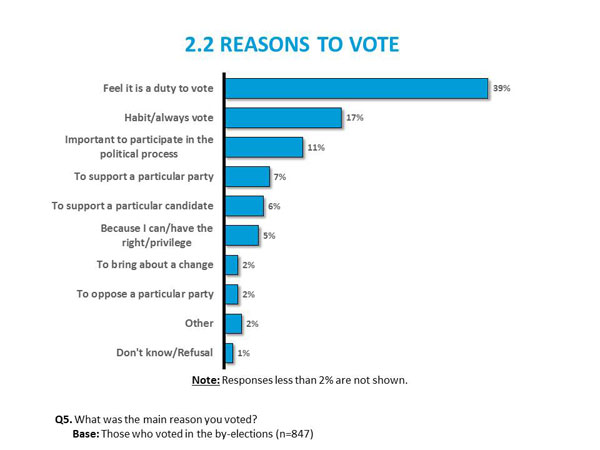 Text version of "2.2 Reasons to Vote"

Both ridings were pretty similar in terms of reasons why electors voted in the by-elections. 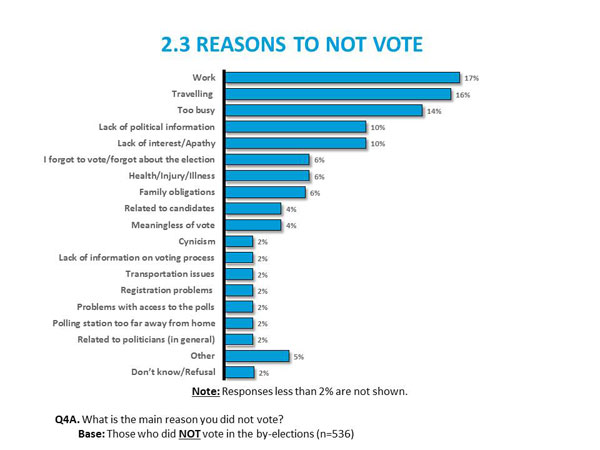 Text version of "2.3 Reasons to not Vote"

In both ridings, those who did not vote in the by-elections had similar reasons. However, non-voters in Whitby–Oshawa (19%) were significantly more likely to say they were busy as compared to non-voters in Yellowhead (12%).

2.4 Potential motivators to vote in future 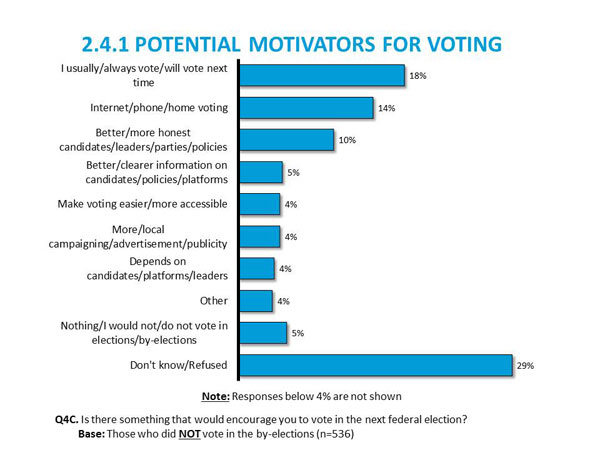 All non-voters were also asked what would encourage them to vote in future elections. The two key themes that emerged include making the voting process more convenient and quality of the candidates and parties contesting in an election. For instance  about 14% of non-voters indicated Internet/ phone/home voting as options that would encourage them to vote and another 10% of non-voters mentioned better/more honest candidates/leaders or political parties.

Among those who did not vote in these by-elections, the proportion of respondents who would be encouraged to vote in the next federal election by Internet/phone/home voting was significantly higher in Whitby–Oshawa (21%) as compared to Yellowhead (11%). These results also reflect on the fact that significantly greater proportion of electors in Whitby–Oshawa indicated being busy as a reason for their non-participation in these by-elections.

All those who did not vote in the by-elections for some reason were asked if they would have voted if it was possible to cast their vote on Elections Canada's website. Overall, close to six in ten non-voters said yes to this question; the response was more positive in Whitby–Oshawa (66%) compared to Yellowhead (55%). 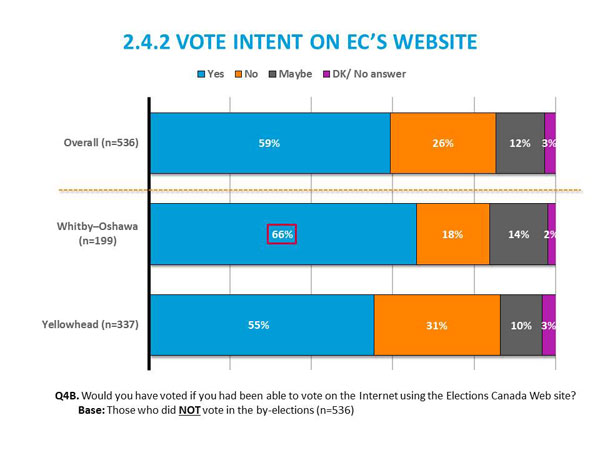 This section delves into the popular polling options and times selected by the electors of Whitby–Oshawa and Yellowhead. It also highlights the accessibility features and effectiveness of signage both outside and inside the buildings to ensure it was easy to locate and access the polling station. 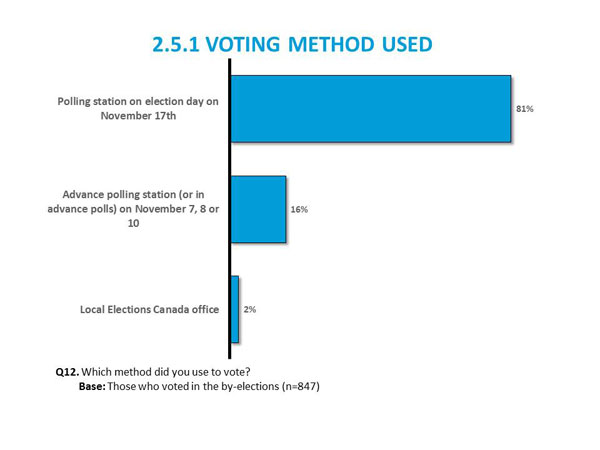 When looking at voting on election day, time slots before 1:30 pm were more popular in Yellowhead (35% of voters) while Whitby–Oshawa voters preferred evening time (after 5:30 pm) for voting (40% of voters).Footnote 6 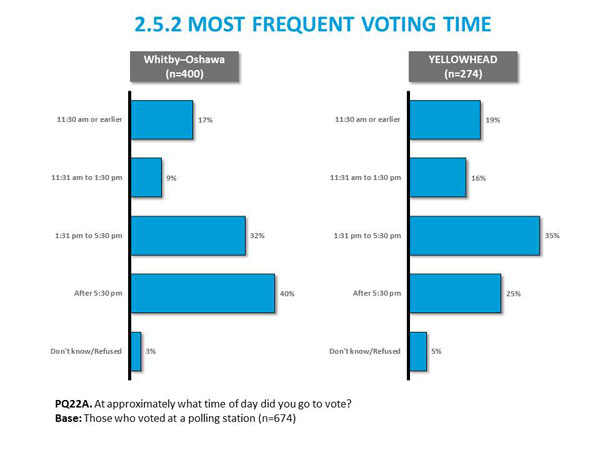 Nearly three quarters (72%) of voters went to the polling station from home while the second most commonly cited commute was from work (20%). None of the other locations mentioned were mentioned by more than 2% of voters. 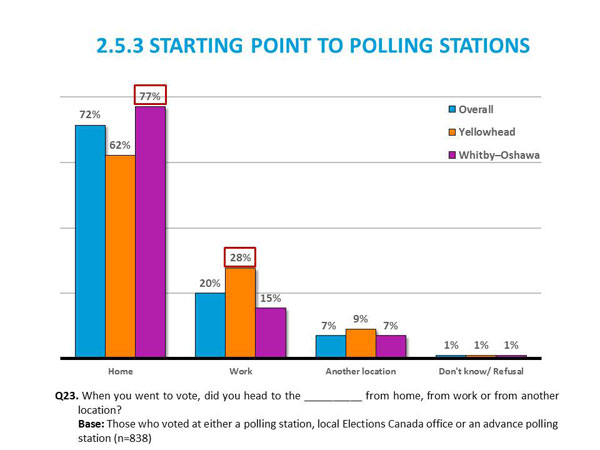 Virtually all voters (98%) found it easy to reach the polling station. Although there were minor regional differences, both ridings received very high scores (97% for Whitby–Oshawa and 99% for Yellowhead).

Similar to what was observed earlier, virtually all voters (99%) found the building to be accessible. The perception of voters across the two ridings was very similar on this aspect. 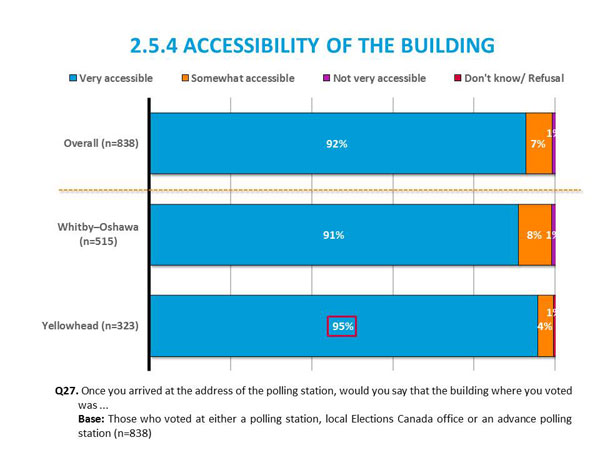 Text version of "2.5.4 Accessibility of the Building" 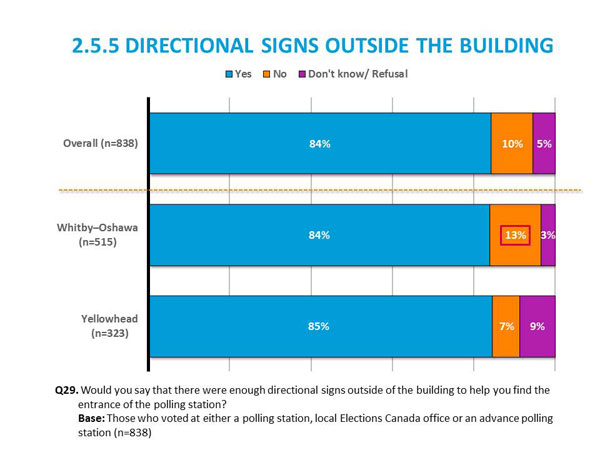 Text version of "2.5.5 Directional Signs Outside the Building" 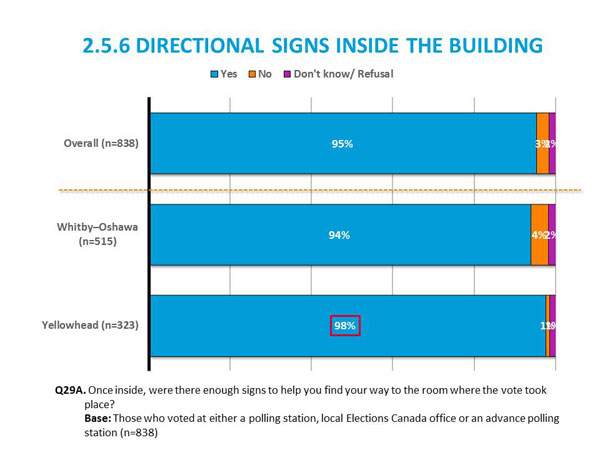 Text version of "2.5.6 Directional Signs Inside the Building"

More than half (55%) of voters either did not see (31%) any signs indicating that the polling station had wheelchair access or were unsure and did not give an answer (24%). 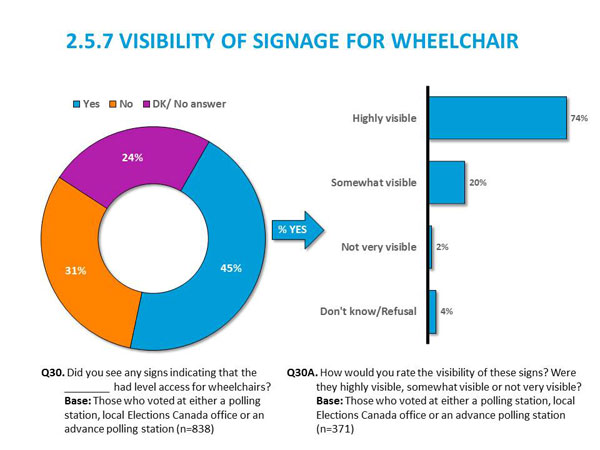 Text version of "2.5.7 Visibility of Signage for Wheelchair"

Among those who did indicate seeing the wheelchair signs, nearly three quarters (74%) said the signs were very visible. This proportion was pretty consistent across most demographic and behavioural categories. 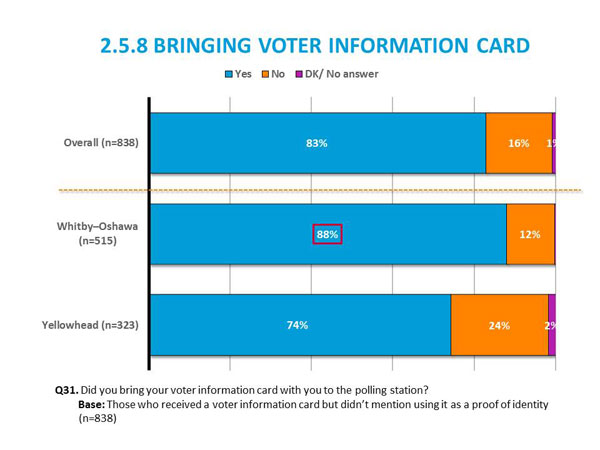