Section 1: Awareness and sources of information

This section focuses on the respondents' level of awareness of the by-elections and on how they accessed information on various topics. Particularly, we will discuss awareness of voting procedures and voting options, the reach of Elections Canada advertising campaigns (radio, print and web), and voters' interaction with EC.

Awareness of the by-elections was generally high across all groups, although it was affected by factors such as age group and employment status. Newspaper, TV and radio were the most recalled sources of information. The first two had a positive correlation to age and the latter was fairly even among all age groups.

About a third of the respondents recalled seeing advertising from EC. Traditional media were mentioned by a higher proportion of respondents. Newspapers were where most respondents remembered seeing the advertisement followed by radio and televisionFootnote 4. The most remembered topic was the election date.

The voter information card (VIC) received in the mail was the most important source of information about voting procedures for over two thirds of electors. Virtually all respondents knew about the proof of identity requirement, and proof of address requirement was known to four in five respondents. Most respondents who were aware of the elections did not contact EC, but among those who did, three quarters found the information they were looking for. 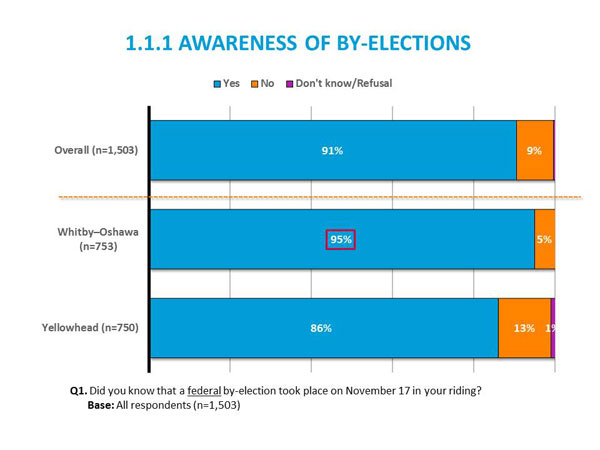 Text version of "1.1.1 Awareness of by-elections"

The three most recalled sources of information about the by-elections were newspapers, TV and radio with nearly three quarters (73%) mentioning at least one of those three media. Particularly, almost half of the respondents (47%) remembered reading about the election on the newspaper while 38% saw it on TV and 33% heard it on the radio. Other popular sources were candidates or parties' elections signs (18%), word of mouth (15%), voter information card (14%), and the EC householder brochure (14%). 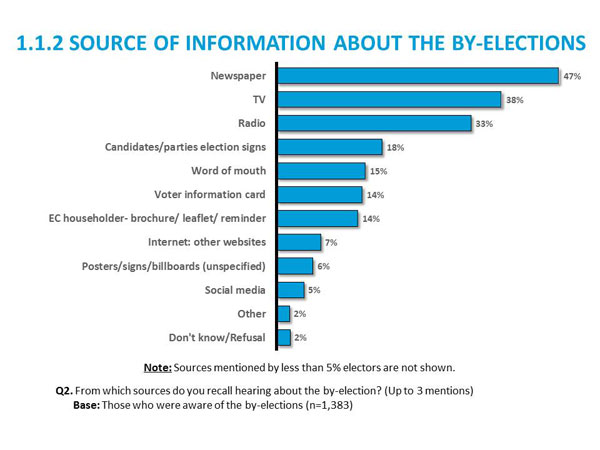 Text version of "1.1.2 Source of Information about the by-elections"

Specific demographic characteristics had a significant effect on the type of media used.

While comparing the two ridings, electors in Whitby–Oshawa were more likely to hear about the by-elections on TV, candidates'/parties' election signs, online and on posters/signs/billboards, while the voter information card was significantly more popular among Yellowhead electors.

Overall, one third of respondents (34%) noticed advertisement from Elections Canada about the November 17 by-elections. Electors from Whitby–Oshawa were significantly more likely to have noticed them (40%) than those in Yellowhead (27%). 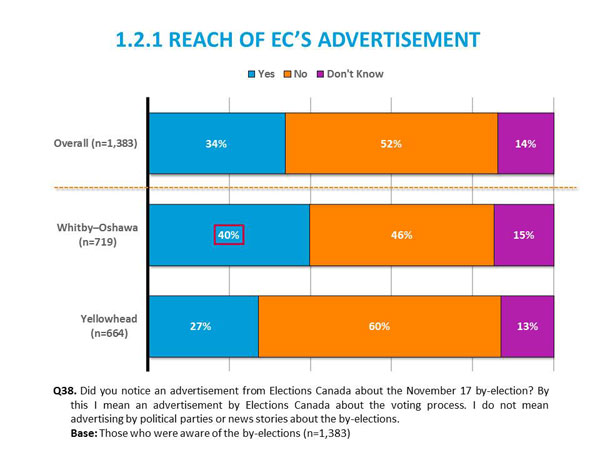 Most respondents recalled seeing the advertisement in the newspaper (59%). One in five recalled hearing them on radio (22%) or seeing them on television (19%). 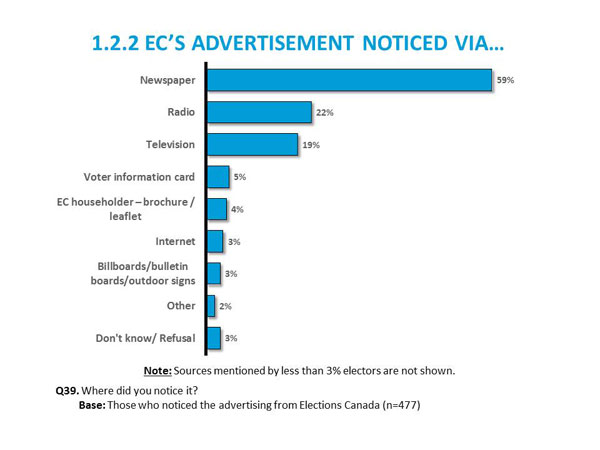 There were some noticeable differences in the two ridings in terms of media on which the Elections Canada's advertisement was noticed. Newspapers were more effective in Yellowhead (65%) than in Whitby–Oshawa (55%), but the opposite is true for radio and television. One quarter of the residents from Whitby–Oshawa noticed the advertisement on the radio (26%) or TV (24%) compared to 16% and 11% from Yellowhead.

The most recalled topic from EC's advertisement was the election date (44%), consistently remembered across all groups. Other topics included the reminder to vote (23%), the requirement of proof of ID and address (17%), polling stations' opening hours (12%), advance polling dates (12%), where to vote (10%) and general information about elections (7%). 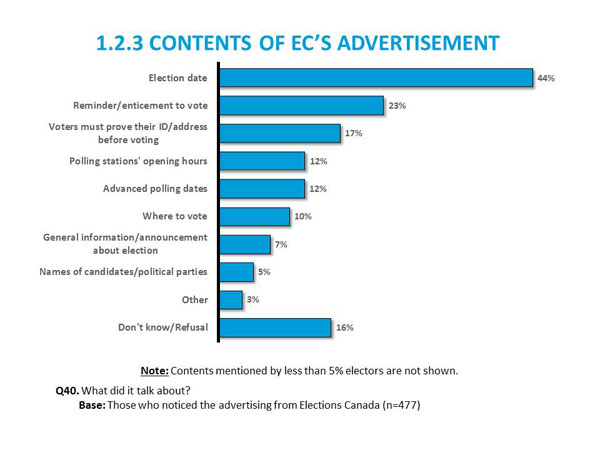 Both ridings were fairly comparable in terms of the most commonly recalled topics from Elections Canada's advertisements. Electors from Whitby–Oshawa were more likely to remember the advance polling dates (15% vs. 7%) and general information about the election (10% vs. 3%) than respondents from Yellowhead; but they were less likely to remember where to vote (7% compared to 16%).

Overall, nearly one in five (18%) respondents recalled hearing or seeing the slogan "Elections Canada, your source of voting information." 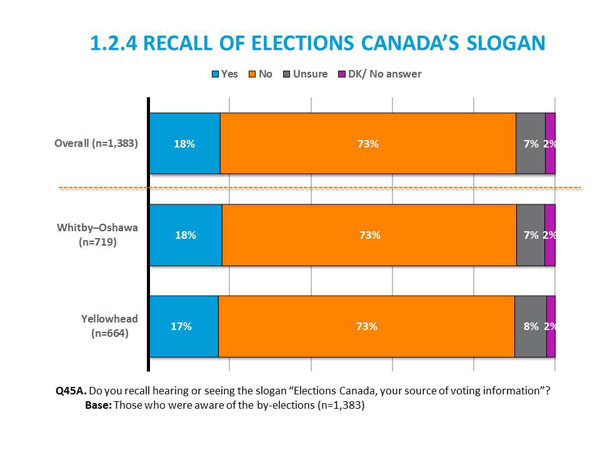 More than two in three electors aware of the by-election said they received their information on voting procedures for the November 17 by-elections via their voter information card (68%), which represented 73% of the respondents from Whitby–Oshawa and 63% from Yellowhead. 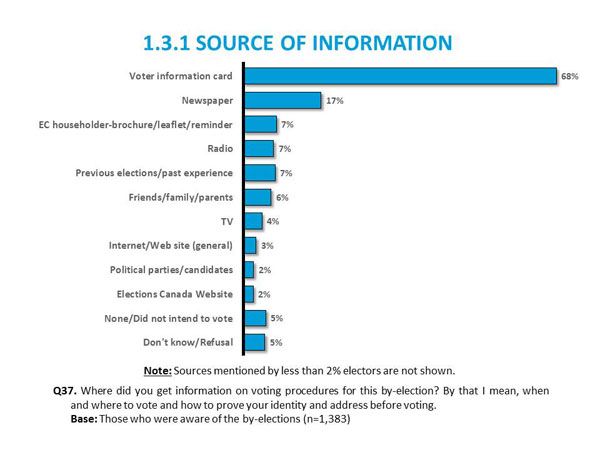 Text version of "1.3.1 Source of Information" 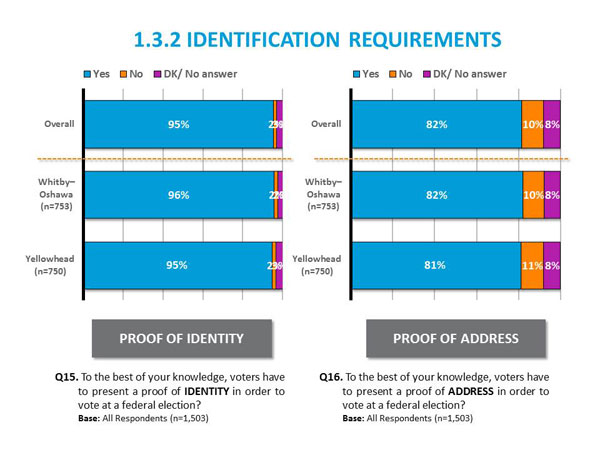 Previous knowledge/experience (50%) is the most common source of information on these requirements followed by the VIC (34%). Other sources mentioned included previous experience (28%), when the respondent actually voted (22%), newspaper (10%), word of mouth (8%), TV (8%), and radio (6%). 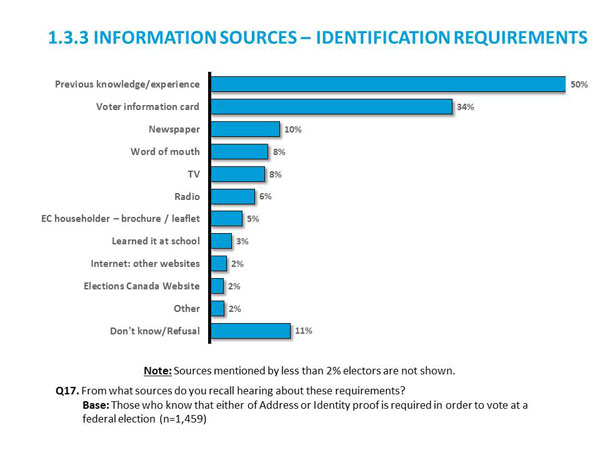 Close to two in five (39%) electors in Whitby–Oshawa learned about identification requirements from a voter information card, which was significantly higher than in Yellowhead (29%). Both ridings were fairly similar in terms of other sources of information on voting requirements.

1.4 Awareness of voting by mail

Knowledge about the possibility to vote by mail was relatively low. Nearly two in five either indicated that they don't know (37%) or said that it wasn't possible (38%). Only one in four (25%) electors was aware of this possibility. There was minimal difference in electors from both ridings in their knowledge about voting option by mail. 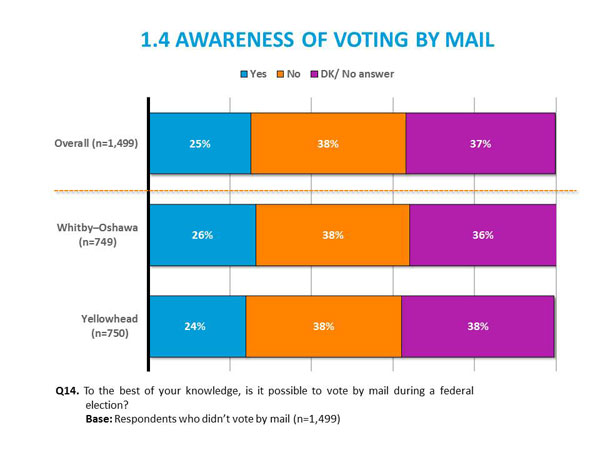 Text version of "1.4 Awareness of Voting by Mail"

A majority of respondents (87%) said having received their personal voter information card telling them when and where to vote. Respondents from Whitby–Oshawa were more likely to say they received their VIC (90%) than those in Yellowhead (84%). 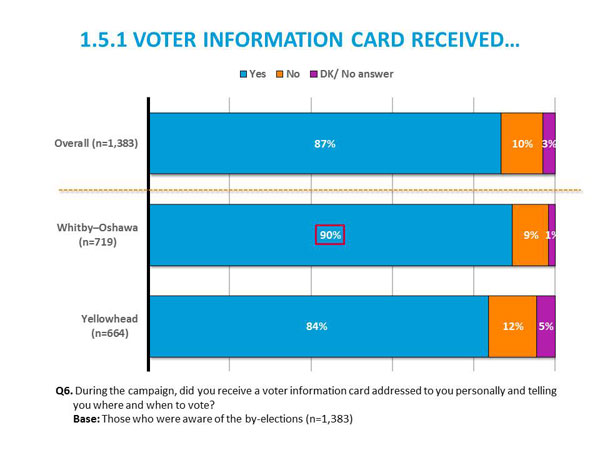 The elector's information on the voter information card was found to be accurate in almost all cases. Among respondents who received their VIC, nearly all claimed both their name (98%) and address (99%) were correct on the card. This was consistent in both ridings and across all demographic groups. 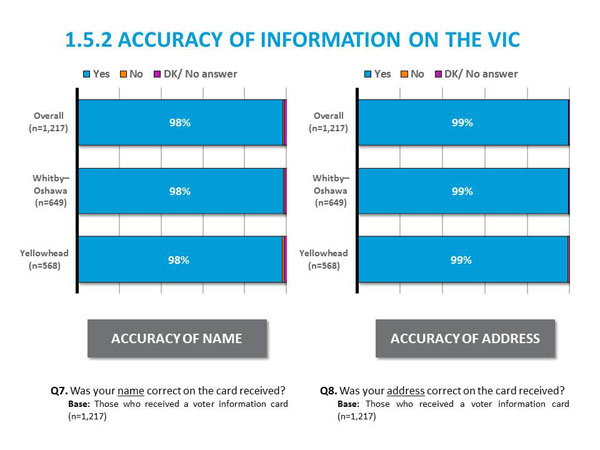 The reason given by respondents who did not make any corrections to the inaccurate information was either because they did not expect to vote anyway or because of some other reason which was not provided.

In addition to providing information on where and when to vote, respondents indicated that the VIC also contained information on advance polls (19%), location of the polling station (11%), date and time of the by-elections (9%), polling station number (8%), voters needing to show ID at the polls (7%), and reminder to vote (5%). More than half (55%) of respondents either did not know or declined to provide a response to this question. 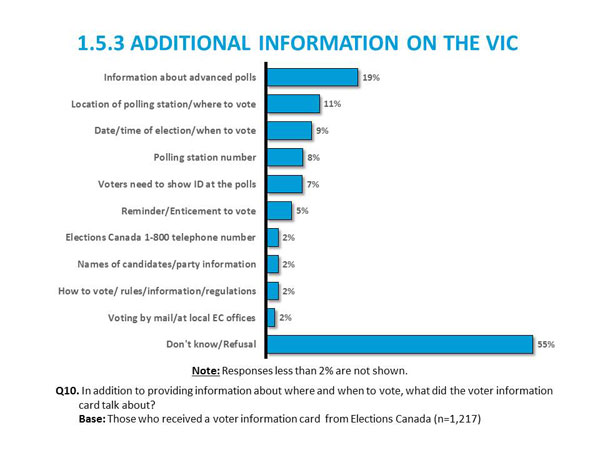 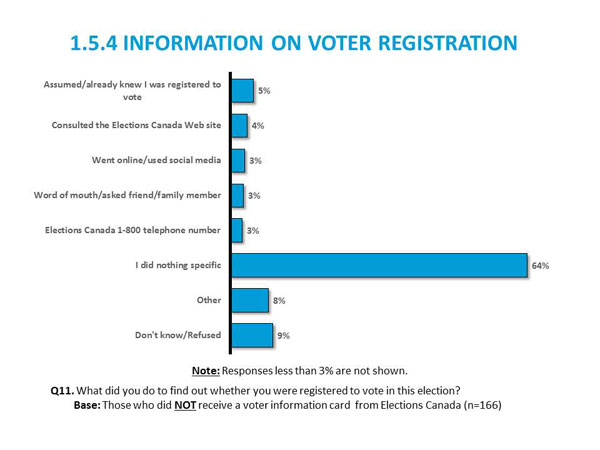 1.6 Interactions with Elections Canada during the campaign

Very few (4%) electors who were aware of the by-elections contacted Elections Canada during the campaign. This trend was found to be consistent in both ridings with almost identical results. 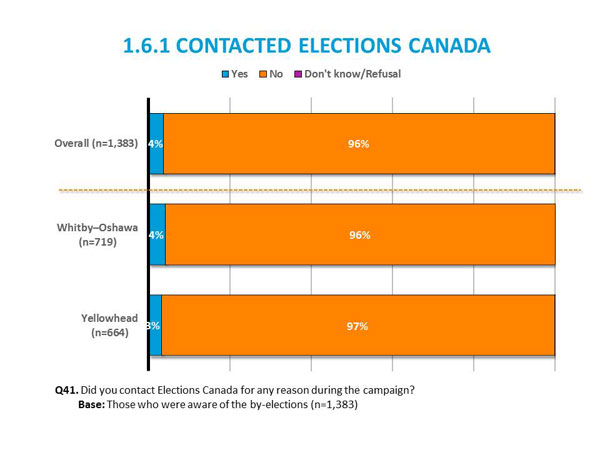 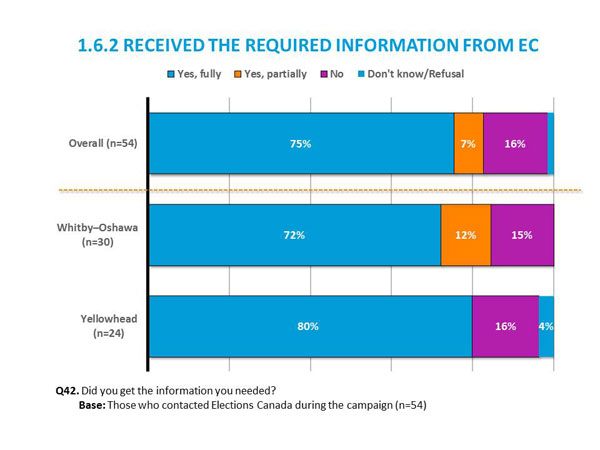 Text version of "1.6.2 Received the Required Information from Elections Canada"

Return to source of Footnote 4 Elections Canada does not use television advertising during by-elections, suggesting recall error among those who mentioned it.

Return to source of Footnote 5 It is important to note that only respondents who had wrong information on their VIC were asked this question. This resulted in a very small group of respondents who provided their response (n=10). Caution should be used while interpreting these results.