This document is Elections Canada's archived guideline OGI 2019-09 and is no longer in effect.

Click on the link for the latest Political Financing Handbook for Candidates and Official Agents.

This chapter defines what is and is not a contribution, explains the rules for administering contributions and provides practical examples. It covers the following topics:

What is a contribution?

What is commercial value?

Note: If the commercial value of a non-monetary contribution is $200 or less, and it is from an individual not in that business, the contribution amount is deemed to be nil.

Only individuals who are Canadian citizens or permanent residents of Canada can make a contribution to a registered party, a registered association, a candidate, a leadership contestant or a nomination contestant.

Contributions can be accepted from minors, but political entities should consider whether the person is contributing willingly and using their own property or money.

If the candidate obtains a loan from a financial institution for the purpose of making a contribution to their own campaign, the loan must be guaranteed by the personal property of the candidate.

Limits on contributions, loans and loan guarantees to a candidate

This table displays the limits for candidates. The limits for all entities are available in Chapter 1, Reference Tables and Timelines.

There is an exception to the limits on contributions:

*The limits increase by $25 on January 1 in each subsequent year.

Note: These examples use the limits in effect for 2019.

Paid leave for a candidate is not a contribution

An employer can give an employee a paid leave of absence during an election period to allow the person to be a nomination contestant or a candidate. The paid leave is not a contribution.

A paid leave of absence for anyone other than a nomination contestant or a candidate is a contribution.

Volunteer labour is not a contribution

What is volunteer labour?

Volunteer labour is any service provided free of charge by a person outside of their working hours, excluding a service provided by a self-employed person who normally charges for that service.

Volunteer labour is not a contribution.

Who is eligible to volunteer?

Any person can volunteer for a political entity, even if they are not a Canadian citizen or permanent resident.

People who work on-call or variable hours can volunteer for a political entity, as long as they are not self-employed in the field and their employer has not instructed them to work for the political entity while receiving standby pay or other compensation.

Note: To know whether a person is an employee or self-employed, ask if they receive a salary or wages, payroll deductions and a T4 slip from their employer or corporation at tax time. If they do, the person is an employee for the purpose of the Canada Elections Act and can volunteer in the same capacity as their line of business, outside their working hours.

Paying volunteers for part of their work

Volunteers can be paid for part of their work, but the paid work is not volunteer labour. An agreement must be in place before the work is performed. It can specify incentive- or performance-based terms of remuneration rather than a fixed rate.

If the campaign gives monetary compensation to volunteers without a prior agreement being in place, it may be considered an inappropriate use of campaign funds that would need to be returned.

The candidate's campaign can give each volunteer nominal gifts (but not money) up to a total value of $200 and throw a thank-you party without this being considered compensation. The associated expenses are other electoral campaign expenses and are not subject to the election expenses limit.

If the campaign gives gifts to volunteers above the nominal gift threshold, it may be considered an inappropriate use of campaign funds that would need to be returned.

After the election, the campaign holds a pizza party for its volunteers. They are each given a $50 travel bag and a $100 gift card in appreciation of their hard work. The cost of the gifts and thank-you party is an other electoral campaign expense not subject to the election expenses limit.

Sponsorship or advertising at a political event is a contribution

A transaction involving the receipt of money by a political entity in exchange for advertising or promotional opportunities directed at members or supporters of the political entity is not recognized as a commercial transaction. Any money received as part of such an arrangement is to be treated as a contribution that is subject to the contribution limit and eligibility rules.

The candidate's campaign holds a golf tournament as a fundraiser. The campaign encourages individuals to sponsor a hole: for $200, they can have their names printed on a small sign attached to the flag pole. The full amount paid by each individual is a contribution to the candidate. The campaign does not ask corporations or unions to sponsor a hole because only individuals can make contributions.

Only the official agent can accept contributions to the candidate's campaign.

Note: When total contributions from an individual are over $200, their name, partial address and contribution amounts disclosed in the financial return will be published on the Elections Canada website.

This table summarizes some important points about accepting contributions and issuing receipts.

Note: It is recommended that campaigns only accept contributions made by way of a traceable instrument.

A contribution of cryptocurrency is non-monetary and not eligible for a tax receipt.

A transaction in cryptocurrency will almost always involve a processing fee. The full amount sent by the individual is a contribution to the political entity, and the processing fee is an expense.

Political entities should set up a two-step process to identify contributors of over $20 and record transaction information from the blockchain so that contributions can be audited.

In all instances, campaigns should be mindful of the rules in the CEA against circumventing contribution rules and watch for unusual amounts or patterns in contributions that they receive.

Tax receipts can be issued only for monetary contributions received within a specified period. The period starts on the day the candidate's nomination is confirmed by the returning officer. It ends on the day that is one month after election day. Under Canada Revenue Agency rules, contributions received after election day must have been in transit on election day to be eligible for a tax receipt (see their information circular IC75-2R9).

Tax receipts have to be issued on prescribed forms, either paper or electronic.

Clara contributed $300 to Peter, who announced that he would be running as a candidate in the next election. Once Peter's nomination was confirmed, Clara made another contribution of $500. Clara will receive a tax receipt for $500, although the total amount she contributed was $800. She must receive an official receipt (not valid for tax purposes) for the other $300.

Determining the date a contribution is made

As most contribution limits apply per calendar year, the date a contribution is made is important. It is also important for reporting purposes because this same date will be used as the "date received" in the candidate's return.

The date a contribution is made is generally the date the contribution is in the hands of the official agent. There are exceptions for contributions made by regular mail, by post-dated cheque and electronically.

If anonymous contributions of $20 or less are collected during an event related to the campaign, the official agent has to record:

Anonymous contributions of $20 or less may also be received outside the context of a particular function. In that case, the official agent has to keep track of the total amount collected plus the number of contributors.

Campaign volunteers organize a wine and cheese event one evening and invite local residents. Approximately 40 people show up. During the evening, one of the organizers passes a basket around to collect cash contributions from the attendees. She informs the guests about the contribution rules: a maximum of $20 can be accepted from any one individual as an anonymous cash contribution. At the end of the evening there is $326 in the basket.

If the campaign receives a contribution that is:

the official agent has to send a cheque for the ineligible amount (that is, the amount over $20 or $200) without delay to Elections Canada, payable to the Receiver General for Canada.

The official agent is responsible for ensuring that contributions are in accordance with the rules set out in the Canada Elections Act.

The following contributions are ineligible:

The official agent has to return or remit a contribution within 30 days of becoming aware that:

An ineligible or non-compliant contribution must be returned to the contributor or remitted to Elections Canada, based on whether or not it was used.

Flowchart 1 explains how to administer ineligible or non-compliant contributions in different scenarios.

Note: These examples use the limits in effect for 2019. 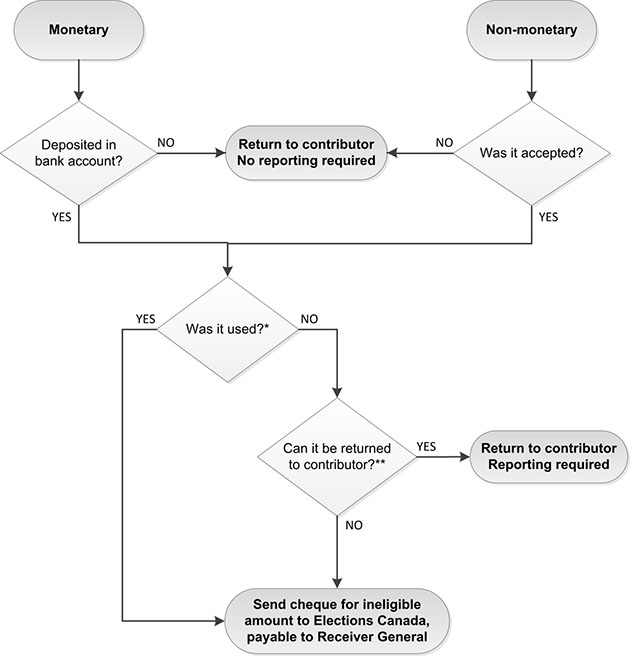 **For example, the contributor's address is known and there are no obstacles to prevent the return.