This content will become a part of the Political Financing Handbook for Registered Parties and Chief Agents. It will be integrated into the chapters on fundraising and reporting.

What is a regulated fundraising event?

A regulated fundraising event is an event that:

It excludes the following events:

Flowchart 1 can be used to check whether a fundraising event is regulated.

Note: Leadership contestants continue to be contestants and prominent attendees after the contest period, until they have paid their campaign debts and fulfilled all their reporting obligations. 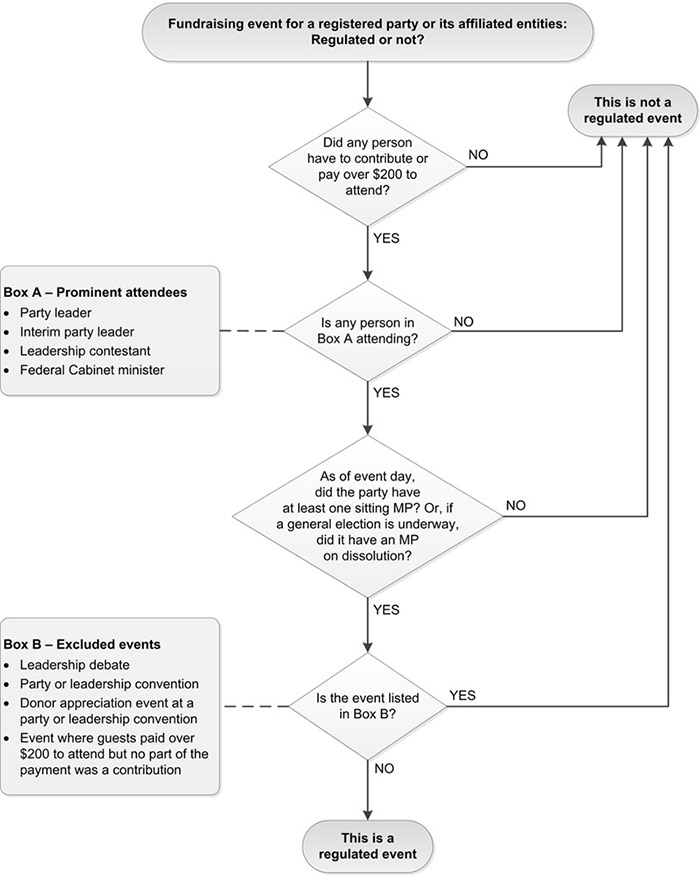 A regulated fundraising event is organized to benefit a registered party or one of its affiliated entities. In all cases, the party is the one responsible for meeting the disclosure requirements. If the party organized no part of the event, organizers must send information to the party so that it can follow the rules.

The requirements are different for fundraising events held outside and during a general election.


Note: The party should ask organizers to provide information well before the disclosure deadline so that the party can comply with the rules. If an event was organized by more than one political entity, they can coordinate sending information to the party. Organizers must notify the party as soon as possible about changes to the information they provide.

*Attendees are not listed in the reports if they attended solely for the following purposes:

If the disclosure rules are not followed, the political entity that received monetary or non-monetary contributions as part of the regulated fundraising event must return them to the contributor or remit them to Elections Canada.

Any of these circumstances will require contributions to be returned:

For more information on returning contributions, see Chapter 2, Contributions, of the Political Financing Handbook for Registered Parties and Chief Agents.

Reports in this table must be submitted to Elections Canada, unless otherwise noted.

Additional reporting if corrections or revisions are required

The chief agent may become aware of a need to correct or revise a Regulated Fundraising Event Report that has been submitted. The chief agent has to apply to Elections Canada for authorization to file an amended report, using the Request for Amendment form. An amended report must be submitted within 30 days after the correction or revision is authorized.

If the registered party is not able to submit the Regulated Fundraising Event Report by the deadline, the chief agent may apply to submit the report within an extended period. The application must be received by Elections Canada no later than two weeks after the filing deadline.

Note: Only a judge may grant an extension requested more than two weeks after the deadline has passed.

Elections Canada will grant an extension unless the chief agent's failure to provide the document was deliberate or was the result of a failure to exercise due diligence.

Note: The Canada Elections Act does not allow for extensions on publishing an event notice or notifying Elections Canada of a regulated fundraising event held outside a general election.