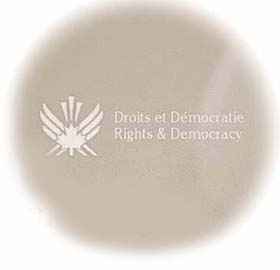 Profile: The Bond of Trust  A Guarantee for
Democracy

Rights & Democracy (International Centre for Human Rights and Democratic Development) is a non-partisan organization with an international mandate. It was created by Canada's Parliament in 1988 to encourage and support the universal values of human rights and to promote democratic institutions and practices around the world. Rights & Democracy works with individuals, organizations and governments in Canada and abroad to promote the human and democratic rights defined in the United Nations' International Bill of Human Rights. Linked with respect for human rights is a fair and smooth election process, which is key to establishing a bond of trust between governors and governed. An overview of the situations in Togo, the Ivory Coast and Haiti shows the immense challenge democratic change poses in certain regions of the world.

The electoral process is at the heart of a democracy. Its mission and functions should normally foster the emergence of the elements that make up legislative authority – namely, a majority government, a leader and a political program – all legitimized by a majority vote within a given country.

As a rule, the electoral process should forge a bond of trust between citizens and their governments that centres on this political program for an agreed time frame.

The past two decades have seen considerable expansion of this process in Latin America, Africa, Asia, and Central and Eastern Europe. Elements of the electoral process, including registration on voters lists, polling locations and dates, the counting of votes, and so forth, can vary widely. Some derive from constitutional provisions and others from specific laws, all of which are open to judicial interpretation.

The electoral process further involves a managing authority that is autonomous or related to an existing administrative structure. The independence and impartiality of this authority are critical. 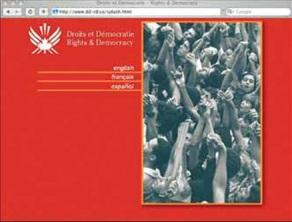 The Web site of Rights & Democracy (International Centre for Human Rights and Democratic Development) is located at www.dd-rd.ca/splash.html.

The concrete application of these constitutional and legislative provisions and the activities of the managing authority call for substantial deployment of human and material resources. They depend on the establishment and control of a broad system, in which justice, fairness, independence and transparency coexist. Only when these conditions are in place can civil and political rights, essential to the bond of trust that makes a democracy, be exercised.

The goal of international electoral co-operation is to support the implementation of this multi-faceted process, taking into consideration a set of complex and compassionate values that can foster both the idea and the manifestation of the bond of trust. Although this bond can always be improved, it must be suitably strong and well established, otherwise a state's institutions will rapidly become ineffective and the legitimacy of its leaders will be called into question.

Rights & Democracy's efforts in electoral co-operation aim to nourish that invigorating climate of trust before, during and after an election.

A successful democratic transition is inextricably linked with respect for human rights, and hinges on their protection and the affirmation of their universality, especially when rights have been denied or restricted. Only an informed civil society that is aware of its inalienable rights can foster and develop democratic standards, mechanisms, institutions, practices and customs.

It is only within this kind of democratic culture that the rule of law, a corruption-free government, mature and representative political parties, free elections, and the consolidation and maintenance of internal peace are possible.

Rights & Democracy, therefore, supports the creation of groups and commissions dedicated to the protection of human rights and the strengthening of regional intergovernmental institutions, such as the African Union. We are committed to a concrete analysis of democratic progress throughout the world by carrying out research, publishing studies, and participating in meetings, conferences and debates.

Our mandate includes working in developing countries and the world's more unstable regions where major efforts at reconciliation and action are needed to engender trust in democratic rights and values. Below are some examples of the initiatives in which we are currently engaged around the world. 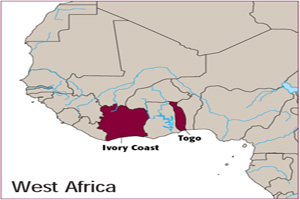 After forty years of authoritarian rule, on which the international community, notably the European Union, finally imposed sanctions, the death of Gnassingbe Eyadema on February 5, 2005, should normally have ushered in a transition to democratic reform in Togo.

However, in the absence of any willingness and hence any initiative on the part of the international community or the African Union, Togolese democracy advocates were left to their own devices and rendered powerless spectators in a series of absurd and tragic events:

In the face of this crisis, certain Togolese non-governmental organizations (NGOs) sought to promote standards and practices likely to create the bond of trust described above. Rights & Democracy was among the first organizations to back their efforts by funding two workshops on training in electoral observation and by financing their observation activities during the April 2005 presidential election.

A Rights & Democracy representative was also on-site to observe events during the election period, but had to be pulled out several hours before the election for security reasons.

Given the country's needs, and the partnerships established during the last presidential election, we are renewing our support for the Togolese people in their ongoing electoral development. We are offering to assist in the establishment of an international coalition with a mission to support democracy in Togo. Although elections to the legislature are unlikely to forge the bond of trust so desperately needed by the country and its citizens, it is unacceptable to abandon democratic activists in Togo for a second time. Another electoral process that violates the most fundamental democratic standards and denies people their civil and political rights is inconceivable.

Our work in the Ivory Coast, a strategic country in West Africa, is in some ways broader in scope than the efforts we deployed in Togo. We have initiated the creation of a coalition of human rights defenders and provided funding to cover its basic needs, as well as the publication costs for a newsletter on human rights violations, and the promotion and protection of those rights at the national and regional levels.

We are currently expanding this coalition in view of the presidential election to be held in the fall of 2006, to allow for greater involvement. This could be achieved through a three-pronged approach.

With the Ivory Coast media, in particular radio stations, we plan to:

With the expanded coalition, we plan to:

This work, which we are currently planning with our Ivory Coast and international partners, could build on the manifesto they are now preparing.

At the time of writing, it is impossible to predict the events or outcome of the presidential election, if it even takes place. However, we do know that its failure or postponement beyond 2005 could again plunge the country into destructive conflict. Our support for the citizens of the Ivory Coast essentially consists in laying the groundwork for a bond of trust that the upcoming election will either validate or thwart. 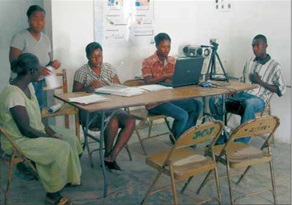 Rights & Democracy shares a willingness with many NGOs and public institutions to support Haiti's democratic activists, and is learning just how difficult it is to translate this willingness into action.

The overall denial of rights and freedoms, worsening living conditions for the vast majority of Haitians, and radically increased violence and incivility affecting more and more people, have given rise to a massive loss of interest in the system. These circumstances are certainly unpropitious for the creation of productive and sustainable partnerships.

However, as in the cases of Togo and the Ivory Coast, letting the Haitian people fend for themselves is out of the question. Rights & Democracy is supporting two major social organizations: the Citizens' Forum and the National Coordination for Advocacy on Women's Rights (CONAP). Their activities during the previous election had significant effect. We are joining efforts with these organizations to determine the most effective methods of intervention and advocacy in the current Haitian context. Our long-term goal is to help them assess and structure their experiences, constructive or not. The results of this work could then be used to create different training programs that promote all human rights, obviously including civil and political rights.

These examples show that recognition of and respect for human rights are central to an open political system, in which the electoral process is transparent and conclusive.

Furthermore, fifteen years of concrete and diversified co-operation have taught us that the famous idea of the indivisibility of human rights cannot be ignored. Even the most well-established electoral process is unlikely to produce the results expected if civil and political rights, in addition to social and economic rights, are not integrated at the axis of a democratic system.