Canadian election administration circles recognize the "New Brunswick model" as an innovative approach to modernizing voting arrangements while keeping all the classic election integrity features associated with supervised voting and a paper ballot audit trail. Staff at Elections New Brunswick developed this model and first used it in a province-wide election in 2008.

This model, by simplifying and streamlining the duties of officials, upholds the integrity of elections while making the experience of voting speedier, more efficient and intuitively easy-to-understood for voters.

The model is also variously known as the "bank teller", "hotel check-in" or "re-engineered voting operations" model. One fundamental difference, compared with the traditional Canadian "polling division" model, is that it no longer restricts each voter to one specific team of two officials  the Deputy Returning Officer and the Poll Clerk  to process their voting-related transactions.

In re-engineering the process, Elections New Brunswick analysed all of the steps in the Election Day registration and voting process and then re-designed its approach to use "task-based" polling officials. New titles were created to describe the task roles: Constable, Voters List Officer, Poll Revision Officer, Ballot Issuing Officer, Ballot Box Officer, and Poll Supervisor.

By separating out functions, the many complicated tasks which the Deputy Returning Officer/Poll Clerk team formerly had to learn and carry out were narrowed, regrouped and reattributed to the newly named officials in easy-to-learn, smaller subsets of duties. It's a multi-stage process in which voters are served efficiently, by whichever task-based election officer is next available. Supplemented with applied information technology, the New Brunswick voting services model has proven an ability to improve processing efficiency for voters, yet reduce the number of election officials required in an average voting site.

From a voter's perspective, the three-stage process involves verifying registration, obtaining and marking a ballot, then inserting that ballot into a ballot box. Computer technology can increase overall efficiencies in the first and third stages. However, in the second stage each ballot issued remains paper-based; each voter still marks his or her individual ballot choice behind a voting privacy screen.

A key feature of this model is that voters who are properly registered in advance are directed to the first of two voter flow "streams"; those who are unregistered or who require special assistance enter the second stream. (See following diagram with streams 2A and 2B.) As electors enter the voting site, a Constable queries the registration status of each person, and directs them to the appropriate stream, where the first stage of verification / registration is performed.

Voters who bring their Voter Information Card (VIC), and indicate to the Constable that their name and address information is recorded correctly, are directed to a check-in table. There, one of a number of Voters List Officers (usually using portable computers with hand scanners, to scan each electors' VIC barcode) will verify the voter's identity, "strike" them from the Election Day voters list, and then provide the elector with a "token" to admit them to the second stage of vote processing.

Electors who do not bring their VIC with them, or who are not yet registered to vote, or whose VIC information is not fully correct, are directed in a second "stream" to a table with multiple Poll Revision Officers, who usually also use portable computers. These Poll Revision Officers are specifically trained to look up existing registrations; verify voting assignments across the district; examine authorized identity documents; correct existing registrations as needed; process new registrations; administer oaths; redirect misguided voters to their correct voting site; and handle other issues associated with ensuring electors meet voting qualification rules. Each voter who satisfies all eligibility criteria and is properly registered then receives a token to use at the second stage. Each voting token bears the voters list sequence number information associated with the voter to whom it is provided.

In the second stage the voter may go to any one of the available Ballot Issuing Officers located nearby. In very large voting sites, an extra Constable may be put in place to assist with directing voters. Each voter exchanges their token for a blank ballot. During this exchange the Ballot Issuing Officer collects and keeps each voter's token, records the ballot being issued in his control register, and prepares the ballot for the voter. He then instructs the elector to take his or her blank ballot behind the next available voting privacy screen, mark their choice with the supplied pen, place the ballot in a provided privacy folder, and then to proceed to a Ballot Box Officer who oversees one or more ballot boxes near the exit of the voting site. Should the voter mismark their ballot, they are told to return to the same Ballot Issuing Officer that issued it.

At the third stage the Ballot Box Officer instructs the voter how to deposit their ballot into either the correct ballot box, or, if automated vote tabulation equipment is being used, into a scanner sitting atop a single oversized ballot box. This instruction focuses on ensuring that the voter's choice remains completely secret as they deposit their ballot. If manual vote counting is used the voter's polling division number will be identified in a portion of the ballot exposed at the top of the privacy folder. The voter is instructed to simply tip the specially-designed folder up to let their ballot drop through the slot at the top of the correspondingly numbered ballot box. Where automated counting is used, the voter is shown how to feed their ballot into the tabulator's scanner feeding mechanism without exposing their voting choice.

In both cases, after the voter deposits their ballot, they hand their empty secrecy folder back to the Ballot Box Officer and then exit the voting site. Empty secrecy folders are later returned to Ballot Issuing Officers for continuous re-use.

The New Brunswick model works with or without the use of technology at the first stage and third stage of the process. The advantages of computerized automation in the first stage (electronic voter check-in) relate to being able to:

As well, in sites with a large number of assigned voters, using computer technology in this first "check-in" stage has been shown to reduce required staffing levels compared to fully manual procedures. However, in very small volume voting site a cost analysis may not justify automated technology and fully manual procedures (using printed lists, ruler, pencils etc.) may be judged more appropriate.

Advantages of using computerized vote-counting technology in the third stage (automated ballot scanning and tabulation) relate to the speed and accuracy with which results for an entire voting location can be calculated, printed and communicated following the close of voting, while still providing traditional polling division-level results.

In the case of very close overall results within a district of voting, all physical ballots remain available to be recounted by hand or by machine, to meet either judicial or administrative requirements. Again, for low volume voting locations, a cost analysis may not support computerized scanning and vote tabulation technology.

Fiscally, the system has proved to be cost-neutral, compared to the "polling division" voting services model, provided technology is deployed only where there is demonstrated cost efficiency.

Elections New Brunswick reports that post-election feedback from returning officers, following the past three provincial and local government elections,Footnote 34 indicates the new system is much more efficient and user friendly to both the voters and the election staff at voting locations.

Using their new model at the same voting site, a typical staffing complement is 18 election officers: 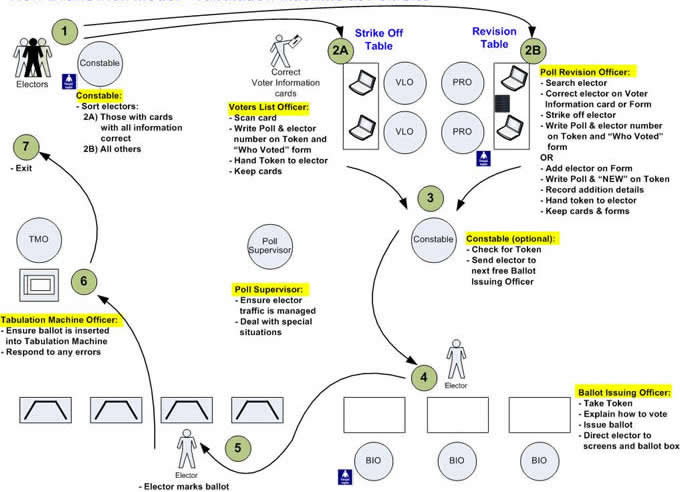 Return to source of Footnote 34 Elections New Brunswick is responsible for administering elections for that province's Members of the Provincial Legislature, Municipal Mayors and Councillors, District Education Councillors, and Regional Health Authority Board Members. The new voting services system was used province-wide in 2008, 2010 and 2012.