Facts about voter ID and the voter information card

Since 2007, electors have to prove their identity (who they are) and their address (where they live) before they can vote in federal elections.

Most electors can prove their identity and address easily, with a single piece of ID  usually a drivers licence. But some eligible electors may have difficulty getting ID cards that show their address.

Some Canadians may not have the necessary documents or ID

In Canada, 86% of the population 18 and over has a driver's license. footnote 1 In some provinces and territories, an increasing number of Canadians who don't drive have a government-issued ID card with their photo, name and address.

According to an EC survey conducted after the 2015 general election, 93% of electors who voted recalled showing a government-issued photo ID with their name and address in order to vote. footnote 2

However, proving address may be especially difficult for some groups of electors, such as seniors living in long term care, students away at school, and First Nations electors living on reserve. 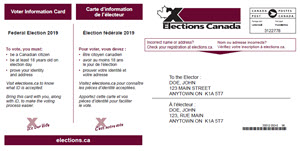 About three weeks before election day, Elections Canada mails personalized voter information cards to electors. The card tells them that they are registered to vote. It also tells them when and where to vote, the different ways they can vote, and how to get more information.

The card is sent to electors registered in the National Register of Electors, at the address in the Register. The Register is a database of Canadians who are qualified to vote in federal elections.

We update the Register using a variety of sources, including the Canada Revenue Agency, Immigration, Refugees and Citizenship Canada, drivers licenceand vital statistics agencies from Canadian provinces and territories. Election workers will even go door-to-door, for example in neighbourhoods with many new residents. We also receive updates from electors themselves either online, in person, or through a mail-in form.

Every year, approximately 11% of Canadians aged 18 and older move.footnote 3 Elections Canada learns about electors' new addresses through our various sources, and we update our records continually.

After we mail the voter information cards, we launch advertising and information campaigns telling electors to look out for their card, and asking them to contact us if they dont get a card or if their card needs updating.

Voter ID in the 2015 general election 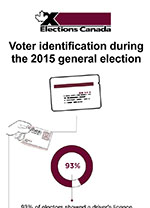 At the 2015 general election, electors had several options some of which have changed as a result of Bill C-76 to prove their identity and address.

At these targeted polling places, electors could prove their address by showing their personalized voter information card bearing their name and address, only if they also showed another accepted ID card to prove their identity. Many electors used this option to exercise their right to vote.

Based on these pilot projects, accepting the voter information card as a proof of address can help groups who may have difficulty showing proof of address exercise their democratic right to vote.

Electors have not and will not be allowed to vote using a voter information card as their only piece of ID.

Return to source of Footnote 2 Survey of Electors following the 42nd General Election, 2016

Return to source of Footnote 4 Survey of Electors following the 42nd General Election, 2016

Return to source of Footnote 5 Turnout and Reasons for Not Voting During the 42nd General Election: Results from the Labour Force Survey, 2016