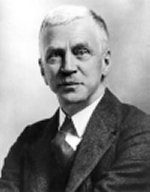 Oliver Mowat Biggar, a retired army colonel, was appointed Chief Electoral Officer in 1920, when the Dominion Elections Act established the position. He served until 1927. It was his task to implement a completely revamped electoral system that centralized financial and organizational aspects of federal elections for the first time.

Colonel Biggar made his first statutory report to Parliament, as required by the Act, following the 1921 federal general election. In it, he pointed out that, despite the right to vote in federal elections that had been extended to women for the first time, many had been prevented from voting because their names had been left off voters lists.

As a result, under Colonel Biggar, reforms were begun to improve the accuracy and completeness of federal voters lists. Also, on his recommendation, Parliament made advance polling more widely accessible, to allow commercial travellers to vote in advance polls on the weekend preceding an election, and established Monday as election day.