Annual Report on the Access to Information Act for the period ending March 31, 2016

3.   Statistical Report on Requests under the Access to Information Act

This section provides an interpretation of select statistics on the processing of requests made to Elections Canada under the Act. All figures and data for the 2015–2016 fiscal year are provided in the attached statistical report (see Appendix II).

3.1   Number and Origin of Formal Requests

Elections Canada received 46 new formal requests for information under the Act during the period from April 1, 2015, to March 31, 2016. This number is down 57 percent from the previous year and is the lowest number of requests Elections Canada has ever received. The lower volume in requests can be attributed to the 42nd general election of October 19, 2015, as Elections Canada did not receive any requests just prior to and during the election period. 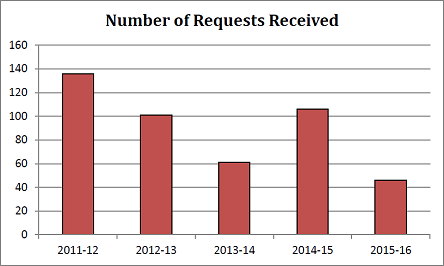 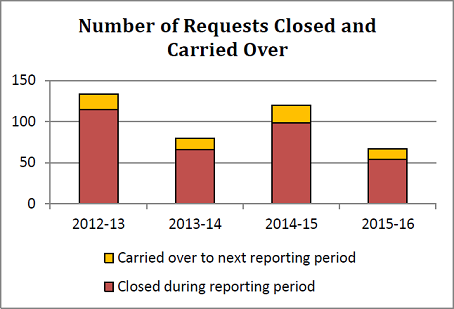 Text description of "Number of Requests Closed and Carried Over"

These requests were initiated by organizations (15), the media (8), private businesses (8), the general public (8), academia (2) and requesters who declined to identify themselves (5). Organizations may include associations, unions, non-profit or non-governmental organizations, offices of members of Parliament and political parties.

Fifty-four requests were completed during the reporting period, 8 (15 percent) of which resulted in full disclosure, down from 21 percent in the previous year. Thirty-one requests resulted in a partial disclosure of information and zero requests were fully exempted or excluded. The ATIP Office was unable to process 11 requests (20 percent) as the records requested either did not exist or there was insufficient information to locate them. Records were partially disclosed 57 percent of the time, largely unchanged in comparison to the 62 percent in 2014–2015. The share of requests completed under each final disposition is relatively similar to the results from previous years. 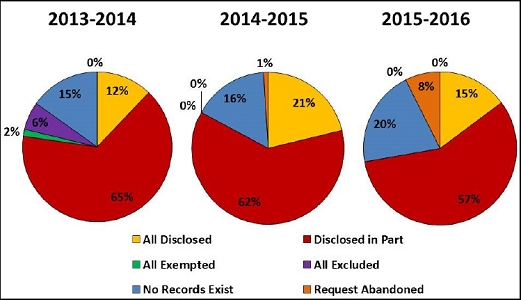 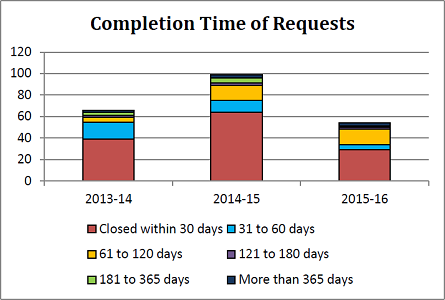 Longer completion times in requests received by Elections Canada can be explained by a variety of factors. They are most commonly attributed to outstanding requests from previous years, requests that require consultations with internal or external parties, and requests that are broad in scope and involve sensitive records related to advice or recommendations developed by or for a government institution, or with information that is subject to solicitor–client privilege.

Elections Canada publishes monthly online summaries of all recently completed, formal access to information requests as required by the Treasury Board Secretariat. The published summaries allow individuals to informally request copies of records previously released under the Act. In the 2015–2016 reporting period, there was an increase in the number of request packages released informally in comparison to the previous year. The ATIP Office released 75 packages informally in 2015–2016, up 142 percent from the preceding year. 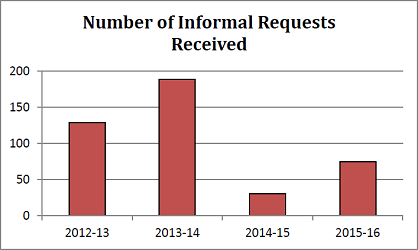 3.5   Exemptions to the Release of Information

The attached statistical report (Appendix II) includes the number of requests for which Elections Canada invoked specific types of exemptions and provides details on these exemptions. If an exemption is invoked several times in the same request, it is reported only once. The graph below includes the seven exemptions applied most frequently during the 2015–2016 fiscal year. 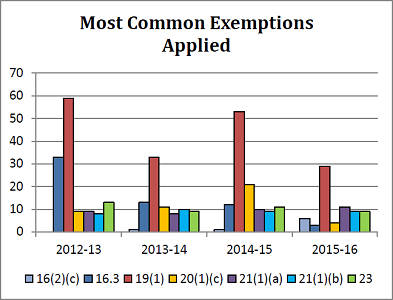 As in previous years, the most common exemption applied was under subsection 19(1) of the Act. In 2015–2016, it was used to protect personal information for 29 requests. Paragraph 16(2)(c) permits heads of government institutions to withhold information that could reasonably be expected to facilitate the commission of an offence. Elections Canada invoked paragraph 16(2)(c) for 6 requests. Section 16.3 of the Act allows the Chief Electoral Officer to refuse the disclosure of information obtained or created during investigations, examinations or reviews conducted under the Canada Elections Act. Elections Canada invoked section 16.3 for 3 requests. Paragraph 20(1)(c) was applied for 4 requests in order to protect third party information. Paragraph 21(1)(a) permits heads of government institutions to withhold information that contains advice or recommendations developed by or for government officials, whereas 21(1)(b) allows the exemption of accounts of consultations and deliberations among government personnel. These subsections of the Act were used for 11 and 9 requests, respectively. Lastly, records were exempted for 9 requests under section 23 as being subject to solicitor–client privilege.

3.6   Extensions of the Time Limit

The majority of these extensions did not exceed 60 days (a total of 12). The time limit of one request was extended by 61 to 120 days and one extension was taken for a period between 121 and 180 days.

It is the practice of the ATIP Office to provide partial preliminary release of records before the extended due date whenever possible.

The ATIP Office received 13 formal consultations from other government institutions in 2015–2016, 13 of which were responded to in fewer than 30 days. One consultation that remained pending at the end of the previous reporting period was also completed in 2015–2016. 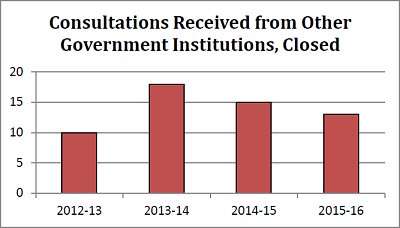 Text description of "Consultations Received from Other Government Institutions, Closed"

During this reporting period, the ATIP Office expended $179,106 to administer the Act. Salaries accounted for $104,952 of this total, whereas spending on goods and services amounted to $74,154 (including consultant services).