One hundred years of supporting democracy

Many Canadians will be surprised to know that we didn't have an independent body to run federal elections until about 50 years after Confederation.

The goal was to restore public trust in the federal electoral system. Special election laws passed during the First World War had led to controversy. 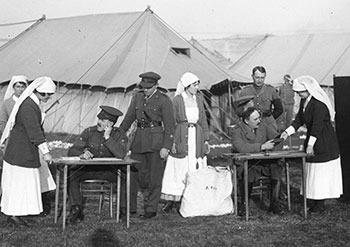 Canadian military nurses vote at an overseas field hospital in 1917. Credit: Library and Archives Canada, PA-002279 The decision to create a non-partisan election office, independent of any government or political party, made Canada a pioneer, and it would mark a defining moment in the story of our democracy.

Elections Canada has evolved since its creation to meet the changing needs of Canadians.

Some things, like the system of voting by paper ballot, remain the same. Others, such as the ability to register online, make the process easier.

One thing that has not changed is our founding principles of independence and non-partisanship.

As we mark 100 years, we plan to highlight our origins and evolution. Please join us in learning about this milestone in Canada's democratic journey.

Elections Canada was one of the first independent electoral agencies in the world.